Selah shipyard in Tuzla shut down 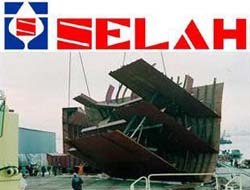 The Selah Shipyard in Istanbul's Tuzla region will be shut down due to the recent spate of deaths among workers, Istanbul's governor said yesterday.

ONE SHIPYARD IN TUZLA SHUT DOWN BY AUTHORITIES

The Selah Shipyard in Istanbul's Tuzla region will be shut down due to the recent spate of deaths among workers, Istanbul's governor said yesterday.

The decision to shut down the shipyard, taken by the Provincial Labor Department, was based on the report prepared by Labor Ministry inspectors. Muammer Güler said the shipyard had certain deficiencies concerning workers' safety.

Work-related deaths at shipyards in Istanbul's Tuzla region has also forced authorities to tighten the rules for issuing shipyard licenses, with periodical checks and use of trained personnel in certain areas also among the new guidelines.

According to daily Milliyet, the Undersecreteriat for Maritime Affairs has prepared a new set of guidelines that will increase safety in workplaces. Only experienced and licensed workers will be able to work as crane operators, as most of the accidents in Tuzla's shipyards happened near or involved a crane.

According to the records, 93 workers have died at Tuzla's shipyards since 1985, with most deaths caused by electrocution, falling from heights and explosions.

Only this year, eight workers have already died in various accidents at Tuzla's shipyards.

A group of Port and Shipyard Workers Union, or Limter-??, members staged a protest rally in front of the shipyards Tuesday, calling on workers to join a general strike beginning June 16.

The workers, carrying empty caskets, poured red paint over them to symbolize the recent deaths.

Limter-?? General Secretary Kamber Sayg?l? criticized both Labor Minister Faruk Çelik and the shipyard owners for not caring about the deaths.

Ali R?za Öztürk, a member of Parliament's investigation commission formed to prepare a report on the deaths in Tuzla, said Tuesday that workplace safety at shipyards was left to the conscience of shipyard owners.

?If a shipyard takes all the necessary precautions and there are still deaths, no one can say anything. However, if there is a definite danger to workers and the shipyard owners don't take any action, one cannot call this an accident. This is murder. Shipyard owners haven't even begun to implement a workplace safety program. I don't believe there is anything lacking in the regulations. The problem is in the implementation of these laws and introducing the necessary inspection mechanism,? he said.

One of the owners of Desan Shipyard in Tuzla, Cengiz Kaptano?lu, dismissed claims that the workers' deaths were accidents, arguing that the issue was a criminal matter.

In comments published in yesterday's daily Hürriyet, Kaptano?lu complained about newspapers calling shipyards in Tuzla ?the shipyards of death.? ?No one can desire the death of people one works with. I am very upset. We have decided to sell the shipyard,? he said.

People were looking for the reasons behind the deaths in all the wrong places, he said, adding, ?How can two workers die in the same shipyard in the same week? One of the dead workers had built nine ships in the last five years. No one is asking the police department or the National Intelligence Organization, or M?T, about the deaths.?

He said the shipyards had incurred losses for many years and business had picked up only recently. The shipyard industry had suddenly become popular, he said.

?If so many ships are built in such a short a time, things don't work that well. These days you cannot find even three experienced workers at the shipyards,? he said.

According to figures, the number of workers in Tuzla's shipyards used to be 5,000, with four deaths in that time. The number of workers increased to 13,545 with five deaths in 2002 and eventually grew to 33,480 in 2007 with 12 workers dying in accidents.Governor Güler, speaking yesterday about the statements made by Kaptano?lu, said all such deaths were investigated, with charges filed if anyone was found at fault.

This news is a total 2441 time has been read