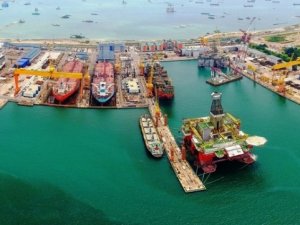 Sembcorp Marine posting a net loss of $84 million in the first half due to the COVID-19 shutdown, which closed all of its Singapore yards for months.

Addressing investors during an earnings call on July 15, SembMarine president and chief executive Wong Weng Sun said that the unforeseen crisis of the pandemic has had a telling impact.

All segments of SembMarine's business posted losses in the six-month period, with the exception of the repairs-and-upgrades business, which saw a profit due to higher-margin upgrade projects in the first quarter.

Last month, Sembcorp Marine announced plans for a de-merger separating its business from Sembcorp Industries, a conglomerate with interests in power generation and urban development. It has also launched a $1.5 billion recapitalization plan centered on a debt-for-equity swap; the transaction will leave the Singaporean government's main holding company, Temasek, with a 29 percent stake in SembMarine.

In Singapore, Keppel Shipyard will fabricate, complete and integrate the topside modules and mooring support structure for a floating production storage and offloading vessel. This vessel which will be fabricated in Singapore by Keppel Shipyard and will have the capacity to process 90,000 barrels of oil per day. Delivery is scheduled for the second quarter of 2021.

In Brazil, Keppel O&M's BrasFELS shipyard was awarded a topside fabrication contract for an FPSO for the Buzios field in the Santos Basin, off the coast of Rio de Janeiro. Work on the vessel is expected to start in the third quarter of this year at the BrasFELS shipyard in Angra dos Reis, with delivery scheduled for the fourth quarter of next year. It will be capable of processing 150,000 barrels of oil per day.

Not all of Keppel's news has been good: it also faces an effort by UK-based rig operator Awilco Drilling to end the construction contract for a $425 million semisub, the future Nordic Winter. Awilco -which had been struggling to make its next installment payment for the rig - alleges that Keppel breached its contract, allowing Awilco to avoid further payments and claim a refund of $54 million. Keppel denies Awilco's allegations and has cautioned that it could seek further compensation if Awilco fails to pay its next installment.

This news is a total 1278 time has been read
Tags: Sembcorp Marine Posts Steep Loss Due to COVID-19 Shutdown