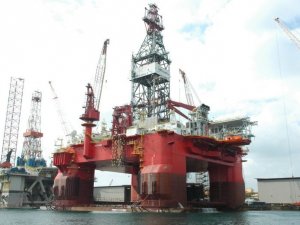 Singapore rig-builder Sembcorp Marine’s quarterly profit halved as customers deferred projects, and it faces prolonged uncertainty on contracts from its biggest client, Sete Brasil, whose shareholders have approved its bankruptcy.

​Sembcorp Marine posted a profit of S$55 million ($41 million) for the three months ended March 31, compared with a profit of S$106 million a year ago.

Sembcorp Marine and its cross-town rival Keppel Corp have been hit by slumping orders as oil prices dropped nearly 60 percent since mid-2014.

Exacerbating the situation are troubles at Sete Brasil, a company set up by corruption-battered Petroleo Brasileiro SA (Petrobras). The graft scandal and recession have crushed popularity for President Dilma Rousseff, who is facing ouster.

Sete Brasil’s shareholders last week voted to allow it to seek bankruptcy protection. It has paid neither Sembcorp Marine nor Keppel since late 2014.

Both companies have said provisions taken last year for those contracts are currently sufficient, while Sembcorp Marine started arbitration proceedings against subsidiaries of Sete Brasil, from which it has won orders worth $5.6 billion.

“For Sete Brasil, there is going to be a lot of unknowns such as the ongoing political scandal there, I doubt anything will be done this year. So the arbitration can just drag on for a while,” Joel Ng, an analyst at KGI Fraser Securities, said before the results were announced.

A collapse of Sete Brasil would be devastating not only for the investors that backed the project but for dozens of local suppliers. More than 800,000 local shipbuilding jobs could be lost, triggering $10 billion in losses, industry estimates show.

“Such development and the deteriorating economy have contributed to the ongoing volatility and uncertainty of the situation in Brazil.”

SembCorp Marine, a subsidiary of industrial conglomerate Sembcorp Industries, posted quarterly revenue of S$918 million – a drop of about 30 percent from a year earlier. Its order book stood at S$9.7 billion at the end of the quarter.

The company’s cashflows have come under pressure as customers delay taking deliveries of their projects, hurting its gearing levels, analysts said.

Earlier this year, Reuters, citing people familiar with the matter, reported the parent may inject funds into SembCorp Marine or buy full control to replenish finances.