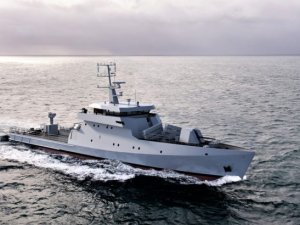 The Ministry of Armed Forces of Senegal and French shipbuilder PIRIOU signed November 17 a procurement contract for three OPV 58 S for the Navy of Senegal. The vessels will be fitted with missile systems, a first for this African navy.

Construction of the three vessels will start in early 2020 while their delivery is set to take place by mid-2023. The contract also includes follow on support which will be conducted at the local site of PIRIOU NGOM SENEGAL.

The “OPV 58 S” is a robust and versatile 62 meters patrol vessel dedicated to surveillance, identification and intervention missions. In addition to its projection capabilities (commando RHIB), it has a first-rate deterrent capability through its anti-surface warfare and anti-aircraft weapons systems.

Among the ship’s major innovations and capabilities are:

Based on the images, the OPV 58 S will be fitted with missile systems, a first for both the Senegalese Navy and the Piriou shipyard. The weapons suite of the OPV 58 S appears to consist of:

A 76mm main gun by Leonardo

A SIMBAD-RC surface to air system by MBDA (maybe in its SPIMM containerized variant).