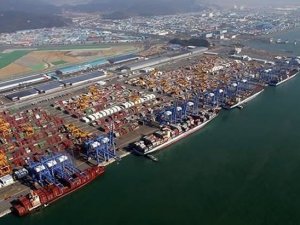 With transpacific freight rates hitting extraordinary highs and shippers struggling to find slots on crowded boxships, the South Korean government has waded in, determined that carriers do not skip the peninsula in favour of neighbouring China.

The Ministry of Oceans and Fisheries met with nine lines and the Korea Shipowners’ Association yesterday to warn that shippers were airing grievances that they were unable to export their goods.

It is merely yield optimisation, and there is nothing wrong with that “Any reported unjust contract violation or unilateral change in contract terms will be scrutinised and punished if necessary so that the market order can be maintained,” the ministry explained.

“If a carrier has a contract with a shipper which contains specific service conditions, naturally those should be honoured – so that’s one thing.

Otherwise it is merely yield optimisation, and there is nothing wrong with that.” This is the second time this year the Korean government has stepped in to voice concern about the soaring freight rate environment on the transpacific.

Counterparts in Beijing and Washington DC have also been keeping a close eye on the situation and have met with liner representatives too.

This news is a total 3310 time has been read
Tags: Seoul summons liners as red-hot transpacific market worries exporters