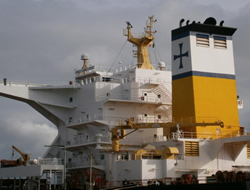 Diana Shipping Inc., a global shipping company specializing in the ownership of dry bulk vessels, on Friday announced that it has entered into a time charter contract.

The gross charter rate is US$18,350 per day, minus a 5% commission paid to third parties, for a period of about twenty-two (22) months to maximum December 31, 2015. The charter is expected to commence upon delivery of the vessel to the Company, by the end of November 2013.

As previously announced on October 8, 2013, the above mentioned vessel is a 2013 built Capesize dry bulk carrier of 179,134 dwt that the Company entered into an agreement to purchase in October 2013. On the same date it was also announced that the vessel was chartered to Oldendorff Carriers GmbH & Co. KG, Luebeck, Germany, (“Oldendorff”) at a gross charter rate of US$11,500 per day, where the charterer had the option to redeliver the vessel at any time before, but not later than, March 30, 2014. Oldendorff is now expected to redeliver the vessel back to the sellers before the new owners take delivery of same.

This employment is anticipated to generate approximately US$11.8 million of gross revenue for the minimum scheduled period of the charter.

Including the aforementioned vessel Diana Shipping Inc.’s fleet currently consists of 36 dry bulk vessels (2 Newcastlemax, 10 Capesize, 3 Post-Panamax, 3 Kamsarmax and 18 Panamax). The Company also expects to take delivery of 2 new-building Ice Class Panamax dry bulk vessels during the first quarter of 2014, and 2 new-building Newcastlemax dry bulk vessels during the second quarter of 2016. As of November 15, the combined carrying capacity of Diana Shipping’s fleet, excluding the five vessels not yet delivered, is approximately 3.9 million dwt with a weighted average age of 6.7 years.

This news is a total 1616 time has been read