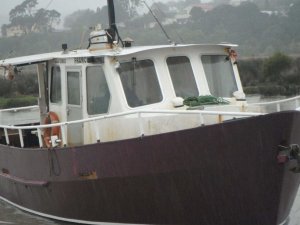 Seven people died and one is missing after fishing boat Francie capsized in the Kaipara harbor, north-west off Auckland, New Zealand.

The vessel was returning the port with 11 people on board, passing through treacherous sand bar, but allided with underwater object and suffered large breaches, which capsized her. One fisherman survived by swimming to shore, while another two were plucked to safety by helicopter. The local authorities started large-scale search and rescue operation for the people in distress, but rescuers were unable to save the other passengers. Five bodies were recovered in the first couple of hours of the search, while another two bodies were found overnight and one person remains missing, presumed dead.

“Everyone on the boat apart from the skipper was of Pacific Island nationality – four from Tonga, one from Samoa, and one Cook Islander. The missing person was believed to be a Cook Islander”, said Inspector Willi Fanene of Auckland police. “This is a terrible tragedy for the fishing community and particularly hard for the Pacific Island community. Officers have been assigned to each of the eight families. Grief will be shared through the pacific community, but also by all New Zealanders”, added he.

One of the victims was the boat’s skipper and owner, Bill McNatty, while of the three survivors, two were Tongan and one was of Cook Island descent.

The local authorities started investigation for the root cause of the accident. According to the officials the sea conditions at the time were rough, and getting progressively worse, with sea swells rising to 3-4 m, which might be one of the main circumstances for the tragic accident.

The area of capsized fishing vessel is under monitoring for oil leaks. There is no report about water pollution yet.

This news is a total 3666 time has been read
Tags: Seven people died and one is missing after fishing boat Francie capsized in New Zealand