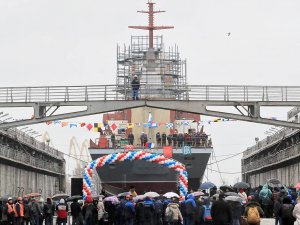 The Severnaya Shipyard (part of the United Shipbuilding Corporation) floated out the Project 20380 corvette Retivy, the Shipyard announced on Thursday.

"The previous four corvettes built by the Shipyard — the Steregushchiy, the Soobrazitelny, the Stoiky and the Boiky — were delivered to the Navy in 2007-2014 and are in service with the Baltic Fleet," the representative informed.

The dockside trials of the corvette Retivy are scheduled for the end of this year, the representative stated. Project 20380 ships developed by the Almaz Central Design Bureau of Marine Engineering (St. Petersburg) are designed to accomplish green-water escort and strike missions and patrol coastal waters. They are armed with universal artillery guns, surface-to-air missile/artillery systems, supersonic missiles and automatic artillery launchers. The Project 20380 corvettes can carry a Ka-27 helicopter.

The main armament is the Uran 2X4 anti-ship missile system, and the Caliber or Onyx from the eighth ship. Also in service with the Redut air defense system, the Package-NK anti-submarine system, the A-190 100-mm gun mount, two 14.5 mm machine-gun mounts and two DP-64 anti-sabotage grenade launchers. There is a hangar for the Ka-27 helicopter.

After the launch ceremony of the corvette, Russia's Deputy Minister of Defense Alexei Krivoruchko announced that an additional series of frigates of project 22350 would be laid in the near future at the Severnaya Verf shipyard. He did not specify the number of ships planned for laying, but explained that we were talking about project 22350 frigates.

This news is a total 486 time has been read
Tags: Severnaya Shipyard launches Project 20380 corvette Retivy