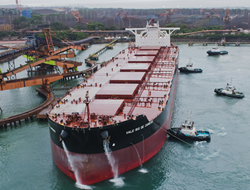 Chinas state-owned Shandong Shipping Corporation has signed a $500 million deal with Brazilian miner Vale SA to operate four of its giant iron-ore freighters, according to the official Xinhua news agency.

The move may pave the way for Vale to start delivering iron ore to China on its growing fleet of Valemax vessels, a development Chinese shipowners oppose due to concerns they could worsen a shipping glut and take market share.

Shandong Shipping signed a strategic agreement with the Brazilian giant, under which Vale has delivered four of the 400,000 tonne vessels to a venture operated by Shandong, Xinhua reported.Shandong Shipping could not immediately be reached to comment.

Approval for Valemax vessels to enter Chinese ports would help Vale cut its transport costs by up to a third, making it more competitive with Australian rivals Rio Tinto and BHP Billiton, whose mines are closer to China.China’s Ministry of Transport barred the mega ships from ports in early 2012, citing safety concerns after the first 400,000 deadweight tonne Valemax docked at Dalian Port in December 2011.

Industry watchers said their use would cut the shipping costs of the raw material for China’s steel mills.Eleven ports in China have the design capacity to handle Valemax ships, including Qingdao’s Dongjiakou port in Shandong, where Shandong Shipping is based, according to shipping newspaper Lloyd’s List.

www.turkishmaritime.com.tr
This news is a total 2517 time has been read