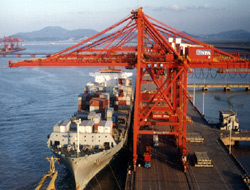 The container throughput of Shanghai's seaport is expected to see stable growth of about 10 percent a year until 2010, a China Ports Future Forum said in Shanghai.

The container throughput of Shanghai's seaport is expected to see stable growth of about 10 percent a year until 2010, a China Ports Future Forum said in Shanghai.

The projected growth is attributed to the booming economy in the Yangtze River Delta and preparations for the 2010 Shanghai World Expo, Xu Peixin, director-general of the municipal port administration, said. The port is at a critical point in its development and "high value-added port services will be the key focus, supported by the government's investment and financial policies," Xu said at the forum.

Xu said forward-looking policy measures for the port will include a more diversified investment strategy to enhance its competitive edge.

But China's port industry still faces challenges, especially with regard to the shortage of large deep-water berths, Xu Li, assistant chief engineer with the Institute of Planning affiliated to the Ministry of Communications, said.

There are also far too few professional port pilots in many coastal seaports, he said.

Wang Ming, an official with the National Development and Reform Commission, said the shortage of land and energy faced by major costal areas of eastern China will also hinder the development of the seaport industry. He suggested improving coordination between China's harbors.

Ken Loh, president of its Asian operations, said construction has begun on the second phase of its Lingang plant in Shanghai.

The $20-million facility will boost production capacity and help the firm secure its position as the market leader on the mainland, he said.

This news is a total 2192 time has been read