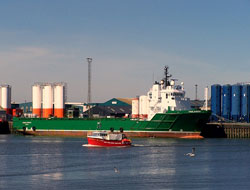 Concordia Maritime has sold its holding of 1.5 million shares in the US shipping company General Maritime.

Concordia Maritime has sold its holding of 1.5 million shares in the US shipping company General Maritime.

Concordia Maritime has sold its holding of 1.5 million shares in the US shipping company General Maritime. As the shares had already been written down to their market value, the sale only marginally affects the company"s equity and total comprehensive income. However, in accordance with IFRS" accounting rules, the effect on the result will be reported in the Income statement and not, as was previously the case, under Other total comprehensive income. The sale has generated a cash infusion of approx. USD 11.5 million corresponding to approx. SEK 80 million. The realized loss of approx. SEK 145 million results in a transfer from Other total comprehensive income to the Income statement. Thus the forecasted Result before tax for the full year of SEK 45 million (SEK 0.94 per share) has changed to SEK -100 million (SEK -2.10 per share).

?The decision to sell the holding in General Maritime was made in view of the weak prospects for tanker shipping. There is a growing structural problem on the supply side due to large-scale deliveries of new tonnage and a too large order book. Our assessment is that tanker shipping companies, which are active solely or partly in the so-called open market, have a difficult time ahead of them generally speaking. We had previously written down the value of the shares so that the loss now realised does not affect the company"s position and we get cash infusion of more than USD 11 million. As regards the trend of the market, we are not at all affected to the same extent since our whole fleet is signed to long-term charters?, says Hans Norén, President of Concordia Maritime.

?It is important to emphasise that the sale does not affect the company"s financial position and that its investment capacity remains intact. On 30 June, our shareholding in General Maritime accounted for about 3.5% of the company"s total assets. Since 2004, we have classed the holding as an asset that can be sold, as a result of which write-ups and write-downs have been made against equity on an ongoing basis based on the market value of the shares. This means that, in conjunction with the sale, the change in equity is relatively small since it mainly involves a transfer to the ?normal? Income statement of an item previously accounted for in the report on the total comprehensive result.?, says Göran Hermansson, Financial Manager.

Concordia Maritime AB (publ) is an international tanker shipping company listed on the Nasdaq OMX Nordic Exchange in Stockholm. The company has ordered ten tankers, which are being built in accordance with the MAX concept. Six P-MAX-vessels have been delivered and four will be delivered during 2009/2010. These vessels, P-MAX, are product tankers of about 65,200 dwt. The MAX concept means that the vessels are designed for maximum loading capacity in shallow waters. They have been designed according to a new concept for safer oil transportation with double main engines in two completely separate engine rooms, double rudders and steering gear, two propellers and double control systems.

This news is a total 5479 time has been read