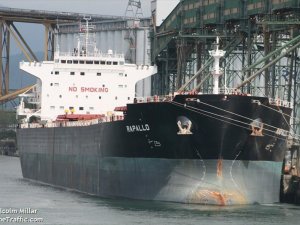 Shares of stock in Dryships, Inc. (NASDAQ: DRYS) were trading just over $1 on Friday, down more than 70% since the beginning of the year, after the company announced an 1 for 8 reverse stock split on Thursday.

You may remember shares of DryShips Inc, an owner of dry bulk, offshore and now gas carrier vessels, soared 1500% on a combination of optimism in the market and the recovering Baltic Dry Index in the week after Donald Trump was elected President – a stand out in the Trump Shipping Stock Rally. But on President Donald Trump’s inauguration day, the gains experienced last November seem like a distant memory.

On Thursday, the company announced that the reverse stock split that has been on the table since October would be 1-for-8, meaning every 8 issued shares of DRYS common stock will be automatically combined into one share. So as of January 23, 2017, the 69,357,841 issued shares will be reduced to 8.7 million.

Investors knew it was coming, since shareholders approved the reverse stock split, but the agreement left it up to the Board to decide the ratio. Following the announcement, DryShips stock fell as much as 30% on Thursday alone, and as of 1:45 PM EST Friday, shares of DRYS were trading at $1.09.

DryShips owns a fleet of 13 Panamax drybulk carriers and 6 offshore supply vessels, as well as two Very Large Gas Carriers which the company purchased from Hyundai Heavy Industries this month. The two vessels will be delivered in June 2017.

This news is a total 1111 time has been read
Tags: Shares of DryShips Fall with Reverse Stock Split Announcement