Shell Greenlights Another Project in the North Sea After Lowering Costs 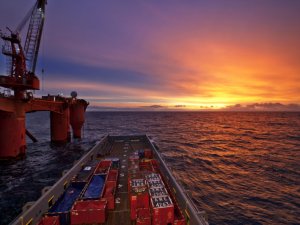 The Anglo-Dutch major, along with partner Exxon Mobil Corp., plans to produce from two wells in the Fram field in the central North Sea by 2020. Deep cost cuts following crude’s decline and connecting smaller oil and gas pools to bigger projects are allowing Shell and other drillers to squeeze more out of an aging North Sea.

“When your back’s to the wall, you’ve got to respond,” Steve Phimister, head of Shell’s U.K. exploration and production unit, said in an interview in Aberdeen, Scotland. “We’ve come a heck of a long way, but I still see a lot more we can be doing.”

Shell, which abandoned Fram’s gas and condensate resources earlier this decade after determining the field wasn’t big enough to be commercially viable, is now finding a way to turn the project, and the region more broadly, into a money-maker. The company may take several more investment decisions in the North Sea this year because of the improved economics, Phimister said.

The Fram wells would be profitable with oil below $40 a barrel, he said. That’s in line with Chief Executive Officer Ben van Beurden’s requirement that all new deepwater projects will only be approved if they make money at that oil-price level.

Shell will connect Fram to a processing facility called Shearwater, also operated by Shell, from where the gas will be sent to shore. Companies can avoid some large costs associated with developing new fields by using existing infrastructure from nearby hubs. That makes smaller reservoirs, where payouts can be too tiny to justify an investment, profitable.

The two wells at Fram will produce up to 13,000 barrels a day of oil equivalent, Phimister said. That would add about 10 percent to the company’s current output in the U.K. North Sea. The government said there are hundreds of small pools like Fram yet to be developed.

While companies have been connecting smaller fields to existing infrastructure for years, Phimister said the oil-price crash has made it more viable. Shell has also cut costs throughout the company since 2014 by reducing staff and using technology such as artificial intelligence that predicts when equipment will break down.

Phimister expects Shell to greenlight “a couple more” projects in the North Sea this year. In January, the company said it would redevelop the Penguins field in the northern North Sea. It also has a 50 percent stake in the Alligin field, which operator BP Plc has committed to develop. Shell will spend between $600 million and $800 million across its U.K. projects annually.

Prior to the Penguins announcement, Shell hadn’t approved a new North Sea project in six years. Instead, along with other oil majors, it was selling assets in the area.

This “is a great example of an operator and supply chain working together to create a competitive project, from something that previously wasn’t considered investable,” Phimister said. “There’s life in the old dog yet.”

This news is a total 698 time has been read
Tags: Shell Greenlights Another Project in the North Sea After Lowering Costs