Shell returns platform supplier to Havila ahead of time 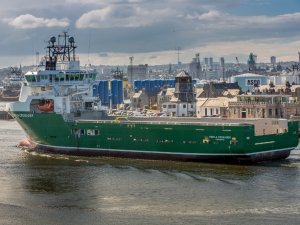 The UK entity of oil major Shell has returned a platform supply vessel to Norwegian shipping company Havila Shipping ahead of time.

Havila said on Tuesday that the Havila Crusader PSV was redelivered early by Shell UK Limited.

The contract was won in January and was for two wells firm, estimated to a period of one year. The deal included options for seven wells estimated to above two years.

Havila added that the two companies have different views on Shell’s obligation in a charter party based on two wells.

According to the shipping company, it will consider which steps to take towards Shell as a result of the early redelivery.

It is worth noting that the vessel will be laid up until market conditions improve.

As for the Crusader, it is an 85m long PSV of VS 485 CD design. It was built in Hellesøy Verft shipyard in Kvinnherad, Norway in 2010, and delivered to the company in December that same year.

To remind, at the time of the contract award to the Crusader an undisclosed client also awarded a 70-day deal with optional periods of up to 35 days to the Havila Jupiter.

This news is a total 548 time has been read
Tags: Havila Crusader , Havila Shipping , Shell