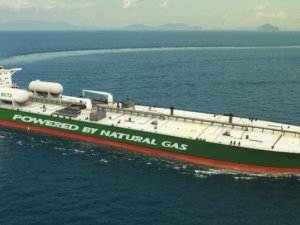 Russian state-owned shipping company SCF Group has signed time charter agreements with a unit of Royal Dutch Shell for the charter of two of the world’s first LNG-powered oil tankers.

The signed agreements mark the next step in SCF Group’s effort to construct six Aframax tankers powered by a combination of liquefied natural gas and heavy oil. The vessels are currently under construction at Hyundai Heavy Industries in South Korea with deliveries scheduled for between Q3 2018 and Q1 2019.

The 114,000 dwt tankers will be built to ice-class 1A notation enabling year-round operation in the Baltic Sea and Northern Europe transporting crude oil and petroleum products.

Under the charter agreement signed announced on Tuesday, two of the tankers will be time-chartered to Shell for a minimum of 5 years and up to 10 years, according to SCF Group.

The charter follows a LNG fuel supply agreement signed between the two companies in 2017 in which Shell agreed to supply SCF Group with LNG bunker fuel using a specialized LNG bunker vessel in the port of Rotterdam and other supply points in the Baltic region. The contract is especially groundbreaking as it is expected to advance the availability of LNG marine fuel for vessels not tied to fixed routes or set timetables.

Shell and SCF Group actually first started working together in 2015 when they agreed to develop LNG bunker fueling for large-capacity tankers.

The Aframax tankers come at a time when more ship owners and operators are choosing LNG fuel over traditional marine fuels to respond to sulphur and nitrogen oxide emissions regulations, including the IMO’s recent decision to implement a global 0.5% sulphur cap in 2020.

“LNG fuel will play a fundamental role in the future energy mix,” said Mark Quartermain, Vice-President, Shell Crude Trading, during Tuesday’s signing ceremony. “Chartering and fueling these vessels highlights Shell’s commitment to LNG as emissions standards tighten. We look forward to continuing to build upon our strong relationship with SCF to support our trading operations in key areas.”

Looking to the future, SCF Group has plans to start the domestic construction of LNG-powered tankers as soon as 2021.

“Together, SCF Group and Shell are leading the development and adoption of LNG as a fuel within the tanker industry, committed to significantly reducing the environmental footprint of energy shipping,” said Evgeny Ambrosov, Senior Executive Vice-President of SCF Group. “After proper experience of operating LNG-fueled vessels, SCF Group will share its feedback on their performance with Zvezda shipbuilding complex, a Russian facility that is envisaged to commence the domestic construction of such large-capacity LNG-fueled tankers by 2021. At SCF Group we have a strong sense of pride that Shell has chosen to partner with us in creating LNG-fueled Aframax tankers.”

This news is a total 533 time has been read
Tags: Shell Time Charters Two Pioneering LNG-Powered Tankers from SCF Group