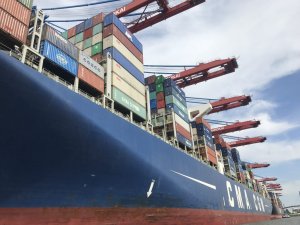 As explained, this quantity of second-generation biofuel derived from used cooking oil will allow the CMA CGM’s ships to travel nearly 1 million kilometers, equivalent to over 80 round-trips between Rotterdam and New York.

Earlier this year, CMA CGM became the first shipowner in the world to successfully test the use of marine biofuel onboard the containerships CMA CGM White Shark and CMA CGM Alexander von Humboldt.

With the newest move, CMA CGM said it is helping to accelerate and expand the use of biofuel in the shipping industry. Composed of 80% of low sulphur fuel oil (LSFO) and 20% of a biofuel made of used cooking oil, biofuel reduces greenhouse gas emissions by 80% and virtually eliminates sulphur oxides emissions.

This new partnership follows a number of the group’s initiatives aimed at protecting the environment.

CMA CGM ordered in 2017 a series of a nine 23,000 TEU containerships powered by LNG. The first newbuild from the batch was launched in China in September 2019.

In 2022, the CMA CGM fleet will count 20 LNG-powered vessels, including the nine 23,000 TEUs scheduled to start joining the fleet from 2020, five 15,000 TEU containerships, as well as six vessels of 1,400 TEUs being built for Containerships.

Beyond technical solutions to limit greenhouse gas emissions, CMA CGM also wants to unite all maritime transport actors in an international coalition. Initiated by Rodolphe Saadé, President and CEO of the CMA CGM Group, and supported by French President Emmanuel Macron, the coalition will work towards the emergence of tomorrow’s clean energy for de-carbonized transport.

This news is a total 583 time has been read
Tags: Biofuel, CMA CGM, Shell.