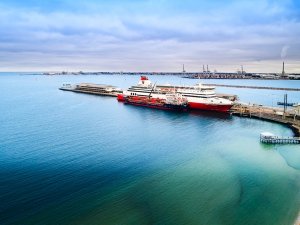 A local ferry operator has opted to use the new fuel following a series of trials Oil major Shell’s Australian brand licensee Viva Energy has launched a very low sulphur fuel oil (VLSFO) ahead of the onset of IMO’s sulphur cap in January 2020.

Manufactured at Viva Energy’s Geelong refinery near Melbourne in southern Australia, the new VLSFO is the first low sulphur fuel oil to be produced in Australasia. The fuel, which has been in development and testing for more than a year, will be available in Melbourne and Geelong from October 2019, the company said in a statement.

Thys Heyns, Geelong Refinery’s General Manager listed price among the fuel’s attributes, "Viva Energy’s VLSFO is expected to be cheaper than diesel and MGO. Its viscosity and lubricity are better than diesel’s, and it is higher in density meaning ships have the ability to run further on VLSFO. Compared to high sulphur fuel oil (HSFO), VLSFO is superior in terms of fuel economy, ignition characteristics, and of course, the environmental benefits it has through reduced emissions.

"Because we manufacture the fuel locally ourselves, we have full control over the process ... This means less risk and no surprises for our customers who use the fuel. It is compatible with most existing fuel systems on board, meaning ships can use the fuel without having to make significant upgrades."

Spirit of Tasmania General Manager Marine Operations Captain Stuart Michael, said "The trial proved the fuel to be volatile and allowed the engines to reach maximum power output. Operating pressures and temperatures were within acceptable limits and similar to those when operating on Marine Gas Oil (MGO) or MFO380. Adverse wear to fuel injection equipment has not occurred under trial conditions. The MEs fuel oil circulation and filtration system was not compromised with the change to VLSFO. Trial conditions have recorded a minimum 3% saving in consumption overall compared to MFO380."