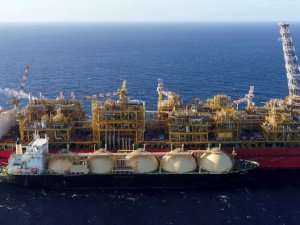 Royal Dutch Shell’s massive Prelude floating liquefied natural gas platform has gone ‘live’ off the coast of Australia after taking on board its first gas.

The LNG was imported by the LNG carrier Gallina, arriving from Singapore, marking what was also Prelude’s first ship-to-ship (STS) transfer.

The loaded LNG will give Shell the opportunity to test Prelude’s LNG export systems before the subsea wells are opened at start-up later this year.

During the LNG import, the 290-meter-long Gallina berthed side-by-side with 488 m Prelude and tested its free-moving offloading arms.

Once onboard, the LNG made its way – in reverse order – through process equipment and pipework to huge LNG tanks in the hull of the facility. Since the Prelude is anchored, the tanks have been designed to withstand the ‘sloshing’ of the product that could happen due to the movement of the facility during adverse weather.

With gas onboard, Prelude’s utilities can now switch to run on gas rather than diesel.

VP Prelude David Bird expressed exciting in reaching the milestone, but remains focused on the end goal. “It’s important we take a moment to celebrate and recognize this achievement,” said David. “It’s equally important we don’t lose sight of the end goal – the safe and reliable start-up of our incredible asset, Prelude, and the delivery of gas to our customers.”

With the facility now ‘live’, Prelude Project Director Didrik Reymert stressed the importance of safety on board.

“The risk profile of the facility has changed fundamentally and this has a great impact on how we work,” Reymert said. “Now, more than ever, we must maintain our unrelenting focus on the safety of our people and our environment.”

“Introducing gas onto Prelude is an important step towards start-up but there is a lot of work to do before we get there,” he added.

Shell’s Prelude FLNG under tow to Australia in March 2017. Photo: Shell Australia
The next step will be to test and ready the LNG plant on board Prelude in preparation for opening the wells. This will be followed by a period called start-up, ramp-up, after which LNG will be produced.

The 600,000 metric ton Prelude FLNG is the largest floating structure ever built. It will be permanently moored about 295 miles off the coast of Western Australia for a period of 20 to 25 years, and at its, it will produce and export approximately 3.6 million metric tons of liquefied natural gas per year from the nearby Prelude field.

Built in South Korea, the Prelude FLNG facility arrived in Australian waters under tow in March 2017.

Shell has said previously that it expects to start production later in 2018.

This news is a total 714 time has been read
Tags: Shell’s Massive Prelude FLNG Goes ‘Live’ Off Western Australia