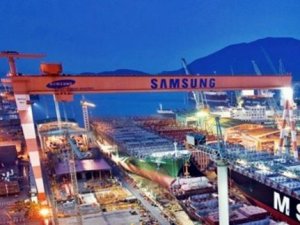 The incident which occurred at the Samsung Heavy Industries (SHI) Geoje yard in South Korea on May 1 has caused delays to the projects under construction at the yard.

According to the French oil and gas major Total, in the aftermath of the crane collapse, when six workers lost their lives and over 20 others were injured, the status of three of the company’s projects, including Martin Linge (Norway), Egina (Nigeria), and Ichthys (Australia), were assessed.

Works related to the Martin Linge project, located 180 kilometres west of Bergen in the North Sea, were suspended until June 1, hence the shipping of the Martin Linge modules to Norway will be delayed. The installation of the modules and lifting operations, which can only be carried out during summertime, given weather conditions in the Norwegian North Sea, had initially been planned for summer 2017 but have now been postponed to summer 2018.

Additionally, works on the Egina FPSO resumed following a two-week suspension and the impact on the project, which is expected to start up in second half 2018, will be limited, Total said. The Egina development is located on deep offshore Block OML 130 some 150 kilometers off the Nigerian coast.

Finally, the central processing facilities (CPF) for the Ichthys project, operated by Inpex, had already departed the Geoje yard several days before the accident and is now installed on the field in offshore Australia. The start-up of Ichthys has therefore not been impacted by the accident and is scheduled for the first quarter of 2018.

“Total has dispatched its experts to join the ongoing investigation to identify the fundamental causes of the accident and implement the necessary preventive measures to avoid any reoccurrence of such accidents. All works at the yard were suspended for several days in order to give absolute priority to the investigation, provide psychological support to the workers and review lessons learned before restarting activities,” Arnaud Breuillac, President, Exploration & Production at Total, said.