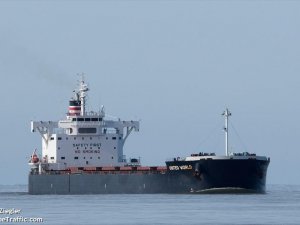 A vessel carrying 58,503 tonnes of sorghum from the United States switched its destination from China to South Korea early on Thursday, according to Thomson Reuters Eikon ship tracking data.

The Peak Pegasus loaded U.S. sorghum from trader ADM’s Corpus Christi grain elevator in Texas and departed on April 3 for Nansha in southern China, according to U.S. Department of Agriculture data.

It is now due to arrive in Gunsan in South Korea on May 10, according to the data.

The cargo is one of almost two dozen bought by China but now stranded after Beijing said it would impose a hefty deposit on U.S. shipments of the grain in an anti-dumping probe.

Importers now facing losses of millions of dollars on their cargoes are trying to resell the grain to buyers elsewhere but are being forced to offer steep discounts.

Four cargoes have been resold to Saudi Arabia and Japan, and another is heading to Spain. If the ‘Peak Pegasus’ unloads in South Korea, it would be first of the Chinese cargoes to be resold in that country.

Several vessels are still at anchor off the Chinese coast however, shipping data shows, while others are still en route to China, previously the world’s top buyer of sorghum.

Some Chinese sorghum importers have asked Beijing to waive the 178.6-percent anti-dumping deposit on U.S. imports already at sea.

U.S. agricultural commodities trader Archer Daniels Midland Co, one of the top exporters of the grain, said on Tuesday it will take a $30 million hit to its trading profit in the second quarter due to disruption to its sorghum sales.

This news is a total 872 time has been read
Tags: Ship Carrying U.S. Sorghum to China Changes Course to South Korea