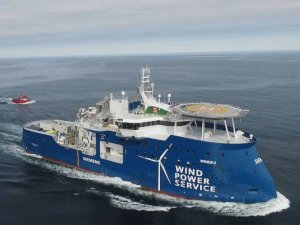 The vessel is the first to feature the new X-Stern designed by Ulstein. Its name will be revealed during a ceremony on June 30.

The vessel is based on Ulstein’s SX175 design, developed to meet the demands of servicing and maintenance of offshore wind installations. Its primary task will be to provide transport and accommodation services for technicians to the Gemini Offshore Wind Park, located approximately 53 miles north of Groningen, Netherlands.

The X-STERN was first introduced in 2014 as the successor to Ulstein’s popular X-BOW hull. The X-STERN is designed so that a vessel can be positioned with the stern faced towards the weather instead of the bow, leading to improved weather resistance, greater operability and reduced power and fuel consumption while on DP mode, making it ideal for

The-SOV-vessel-from-Ulstein-Verft-sea-trialling-in-the-fjords-of-Norway
Photo: Ulstein Group
Ulstein received the order for the vessels in January 2015 by Germany-based Bernhard Schulte through its offshore wind affiliate WINDEA Offshore, marking the first order for the X-STERN hull.

The hull of the vessel arrived at the Ulstein Verft shipyard in Ulsteinvik, Norway in January 2016 after arriving from Poland, where the two hulls were constructed.

The 600 megawatt Gemini wind farm is operated by SIEMENS Wind Power Service. Once operational in 2017, the wind farm will be able to produce enough renewable energy to power about 780,000 Dutch households.

This news is a total 4690 time has been read
Tags: Ship Photos of the Day – Ulstein Delivers First X-Stern Wind Farm Service Vessel