Ship Seized by Migrants off Libya 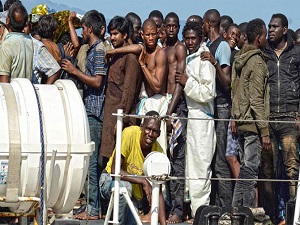 Reuters reported 95 migrants rescued by cargo ship off Libya rejecting leaving the ship in Libya. Migrants were picked up by cargo ship on her way to Misurata Libya on Nov 8, on arrival they refused to leave the ship, and as of Nov 12 were still on board.

They’ve been provided by authorities with food, water, blankets, etc. Not Reuters, nor EuroNews, reported anything about the ship and the ship’s crew – how do they feel and what’s their condition. Are they held as hostages, are they in danger? Are they free to move around and leave the ship? What about shipowner, does he have any chance, together with crew, to be compensated for all troubles and expenses?

This news is a total 872 time has been read
Tags: migrants, libya, misurata, hostage, un