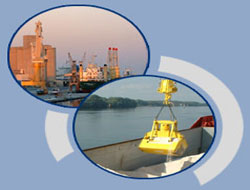 Shipbrokers are beginning to feel the strain from collapsing shipping rates with their daily income falling by more than half in the past four months, according to a senior shipping executive in Dubai.

Shipbrokers are beginning to feel the strain from collapsing shipping rates with their daily income falling by more than half in the past four months, according to a senior shipping executive in Dubai.

With no clear end in sight for the sliding shipping market, brokers' incomes are expected to drop further next year, spreading the effects of the turmoil in the industry.

Shipbrokers are paid a commission on the daily freight rates on every hired ship, but with rates plunging by more than 87 per cent since June their income levels are well down.

"While incomes have not dropped at the same level as the market, the drop is significant compared to income levels at the beginning of the year," said Essam Bella, Middle East Managing Director for Clarksons, the world's largest shipbroker.

"The slide in shipping rates is beginning to be felt in almost all corners of the industry and shipbrokers will be among the worst affected."

Shipbrokers may not be feeling the pinch now as they collect payments for commissions made before the market slump, but Bella said they would begin to feel the impact in six months.

Long-term charter party agreements are either being renegotiated or cancelled by some charterers who feel they cannot continue doing business at rates higher than the market rates. Freight rates in the dry bulk market started on a high this year but have since plunged to levels last seen more than five years ago.

The Baltic Exchange Dry Index, which measures bulk freight rates on the busiest routes, has fallen by 87 per cent after reaching a record high of 11,760 earlier this year due to a slowdown in iron ore imports from China, the financial turmoil and the delivery of new vessels.

"We have reached a period where there is not much further to fall for the shipping market because we are almost hitting the bottom," said Bella. "We are likely to stay at the bottom for sometime until the economy reshapes itself."

He attributes the falling shipping rates to the global economic recession, which was not anticipated at the beginning of the year and whose effects are changing the business dynamics of the shipping industry.

The tightening of credit facilities has severely affected purchasing power for most shippers, causing a severe shortage of cargo volumes that has rendered many dry bulk ships redundant.

Bella, however, said while the Middle East inter-trade shipping would not escape the global economic crisis, the effect would be mild given the unique set-up of the industry in the region.

"Demand for commodities in the region is still high given the high level of economic activity. This demand continues to shield regional operators from the global economic crisis."

A recent report by Drewry Shipping Consultants said the robust performance routes including Asia to the Middle East and India, West Africa and East Coast South America would help to make up for the weak performance in US and Europe.

However, Bella said the 25 to 30 per cent growth projections made early this year would not hold, adding figures were likely to fall below earlier projections.

He said the current slide could be slowed by loosening credit facilities and laying off old dry bulk tonnage from the market, a move that would minimise the impact of ship oversupply.

This news is a total 6015 time has been read