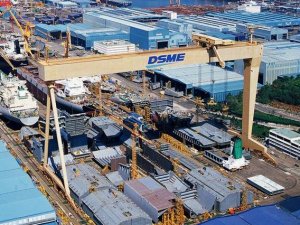 The nation’s troubled shipbuilding industry will begin a series of drastic restructuring programs this month that are likely to lead to the closure of some firms and about 10,000 layoffs over the next two to three years.

Most of the shipbuilders – including the Big Three, Hyundai Heavy Industries (HHI), Daewoo Shipbuilding & Marine Engineering (DSME) and Samsung Heavy Industries – have been running internal restructuring programs since last year. But as they continue to report miserable earnings, the government and financial institutions are demanding they take immediate, aggressive action to overhaul the whole industry.
According to sources and executives in the industry and financial institutions, the Big Three will lay off about 10,000 workers in the next two to three years, and closures and mergers of financially troubled companies of all sizes are also being discussed.
Watchdog agencies including the Financial Supervisory Service (FSS) and Financial Services Commission see the small to midsize companies as marginal firms, which are just breaking even. In 2009, 6.1 percent of shipbuilders were recognized as marginal firms, but the figure increased to 18.2 percent last year, a 12.1 percent rise in five years.
“The government will try to shut down some of the profitless shipbuilders as soon as possible as part of its work to prevent fierce competition among local companies, which was considered a reason Korean companies had to lower their bidding price … to win a project,” said an executive of a shipbuilder on the condition of anonymity. “It means that many workers might lose their jobs soon.”
Last week, creditors of DSME, including the state-run Korea Development Bank (KDB) and Export-Import Bank of Korea, announced they will give 4.2 trillion won ($3.7 billion) of financial support to the shipbuilding industry that is expected to make over 5 trillion won in losses this year.
Last month, industry data showed losses to be reported by the Big Three that will hit over 8 trillion won this year. Government agencies lately have been emphasizing the need to restructure the industry, which impacts not only the firms but also major banking institutions that have invested trillions of won in the money-losing companies.
According to a report released by the FSS in September, the total funds borrowed by the nation’s top five shipbuilders from 16 Korean and 18 foreign banks, including JP Morgan Chase, were 50.092 trillion won as of July. The Export-Import Bank of Korea lent the most at 19.7691 trillion won, followed by KDB with 5.8407 trillion won.
FSS Chairman Yim Jong-yong recently said, “Restructuring is necessary in order to save the Korean economy. We need to shut down companies
that aren’t able to survive as soon as possible.”
Excluding the Big Three, most of the shipbuilders in trouble were vessel parts manufacturers in the past, as the business grew and the industry started making big money, dozens of parts makers become builders. STX Offshore & Shipbuilding, which is under a financial hardship, was one of them.
DSME, which will receive about 4.2 trillion won of financial support from creditors, will be the first to lay off workers. The company, which has about 7,000 production and 6,000 administrative workers, will lay off about 3,000 employees, starting with 30 percent of workers in managerial and executive positions.
Workers at HHI and Samsung Heavy Industries are expected to have a similar fate. Of the 26,000 workers in HHI and 14,000 workers in Samsung, about 3,000 workers are predicted to be cut by each company next year. “It is our first time the company has been making some trillion won of losses,” said a spokesman of Samsung. “We have been receiving voluntary resignations from employees for months.”
Rumors predicting big M&A deals among shipbuilders are spreading, including the scenario of merging Samsung and DSME, as they have a similar number of employees and are running similar businesses.