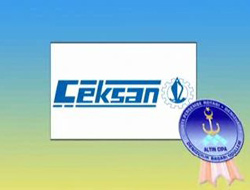 Çeksan Shipyard, which managed its projects successfully both at Turkey and out of Turkey with its professional staff members, determined its aims as high quality and pleasure of costumers.

It completed with a success 35 projects that 22 of these were in Turkey. Our this shipyard which is focussed on itself by the authorities with the result of delivery quality of the ships they build to other countries, and delivery on time and serious project system, finds its achievement the natural result of working for the pleasure of customers, quilificated administration, having professional staff members and skilled components.

The hard works of Çeksan Shipyard brought the "Golden Anchor Award" with the decision of jury.

This news is a total 568 time has been read