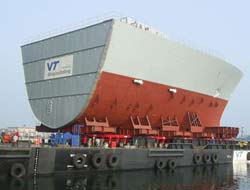 Outlook has dampened following growing fears of a global slowdown.

Outlook has dampened following growing fears of a global slowdown. The share prices of Indian shipbuilding companies were on the rise till recently, as the expected shortage in capacities over the next few years was bringing huge order inflows.

However, the shipbuilding companies such as Bharati and ABG Shipyard have not recovered from the market meltdown as the outlook for shipping has weakened following fears of a global slowdown.

The rupee appreciation will also have an impact on profitability.

The Baltic Dry index, which represents the cost of moving dry cargo and is used as an indicator for the global demand, is down by about 45 per cent since its all-time high in November 2007.

This will impact the shipbuilding companies as realisations would go south. Analysts, however, reckon that Indian shipbuilders would not be affected much as they are low cost producers. About 80 per cent of Bharati Shipyardâ??s orders come from the oil and gas sector, while it is about 45 per cent in case of ABG Shipyard. The demand for new vessels and replacement will remain high as long as crude oil exploration and production investments continue.

The leading players earn operating margins of 25-30 per cent, helped by the 30 per cent export subsidy. If this subsidy is done away, margins could fall to 15-18 per cent.

Shipbuilders would not be affected much by a 5-10 per cent fall in subsidy as volumes are rising and capacities are being expanded. Most companies are booked till FY11 and partially for FY12 and enjoy strong order books of 7-11 times their FY07 revenue. In Q3 FY08, ABGâ??s top line increased by 79 per cent y-o-y and earnings per share went up 55 per cent. For Bharati, the revenues and earnings per share grew 55 per cent and 61 per cent respectively. The ABG Shipyard stock has corrected almost 30 per cent from its recent high and is trading at 18 times estimated FY09 earnings, while Bharati Shipyard trades at 10 times estimated FY09 earnings, and are likely to do well.

Asian Paints reported an improved performance in the December 2007 quarter, thanks to a strong growth in the decorative paints and industrial paints segments. As a result, the companys consolidated operating profit grew by an impressive 50.3 per cent y-o-y to Rs 185.6 crore in the last quarter and net sales rose 25.9 per cent to Rs 1177.6 crore. Its operating profit margin also improved 260 basis points y-o-y to 15.8 per cent in Q3 FY08. In the September 2007 quarter too, the companys operating profit margin had expanded 260 basis points y-o-y to 16 per cent. Asian Paints also benefited from the 11-12 per cent y-o-y appreciation in the rupee in Q3 FY08.

This helped in minimising the impact of rising raw material costs following the price hikes in titanium dioxide and crude oil-based materials.

The adjusted raw material costs as a percentage of consolidated net sales thus declined 270 basis points y-o-y to 56.7 per cent in the last quarter.

Asian Paints has planned capex of about Rs 275 crore in FY08, which includes the expansion of its industrial coating plant at Taloja.

Going forward, the company is expected to maintain strong growth in its key product segments. However, its ability to manage rising input costs will remain crucial.

At Rs 1208, the stock trades at 31 times estimated FY08 earnings and 27 times FY09 earnings, given the growth potential in this sector.

This news is a total 842 time has been read