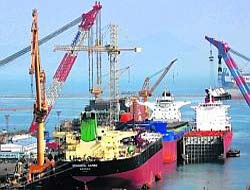 The company didn't provide a comparative figure for 2007 in its regulatory filing yesterday in Seoul. The 2008 sales forecast is 41 per cent more than the seven trillion won it projected for 2007 in January last year.

Shipyards in South Korea, the world's largest shipbuilding nation, may report higher earnings this year as they deliver more vessels to transport raw materials to China and finished goods to the rest of the world. Hyundai Heavy Industries Co and other rivals are expanding production capacity to work through more than three years of order backlogs.

'Earnings will continue to increase this year because the price per ton that is being built will be higher,' said Kim Soo Jin, an analyst at Hannuri Investment & Securities Co in Seoul. 'Operating profit margin to sales is expected to reach a combined average of 11 per cent for the shipbuilders this year, compared with 8.5 per cent last year.' Mr Kim has a 'buy' recommendation for Daewoo Shipbuilding.

Ship prices, rising since 2003 from a 10-year low, have more than doubled to a record as global economic growth increased demand for consumer goods and raw materials, according to Clarkson plc, the world's biggest shipbroker. South Korean yards, which received record orders for a fifth year in 2007 and have backlogs that stretch into 2012, are now delivering vessels from contracts they won in 2004 and 2005.

Daewoo Shipbuilding expects to build more offshore platforms this year as well as vessels that can carry liquefied natural gas and oil. In the first 11 months of last year, Daewoo Shipbuilding delivered 43 vessels, compared with 45 for all of 2006.

'Competition is expected to be fierce this year as production capacity has expanded globally and raw material, including oil, prices are surging,' Daewoo Shipbuilding's chief executive officer Nam Sang Tae said in a New Year's speech to employees. 'Orders for offshore platforms and vessels to transport containers are expected to lead demand this year.'

Daewoo Shipbuilding expects this year's orders to reach US$17.5 billion, 19 per cent less than the record US$21.5 billion in 2007, the company said. That is because of an unexpected surge in demand for container vessels last year.

Bigger rival Hyundai Heavy said on Dec 31 it expects sales to rise 16 per cent this year to a record 18.06 trillion won. Orders for ships, marine engines, offshore platforms and other products may increase 1.8 per cent to US$27.4 billion.

Daewoo Shipbuilding's net income in the first 11 months last year surged almost eightfold to 336.8 billion won. It had an operating profit, or sales minus the cost of goods sold and administrative expenses, of 275 billion won, compared with a loss of 178.1 billion won a year earlier. Sales climbed 30 per cent to 6.32 trillion won.

The shipyard will invest 770 billion won this year to expand capacity by extending the length of its existing docks and building a floating dock to make more vessels. It didn't say how much it spent last year.

This news is a total 898 time has been read