Shipmanagement 2021: Covid and the lost generation of quality crew 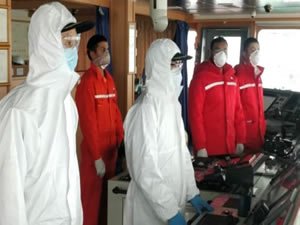 “The fallout effect of this pandemic has been very damaging for the future recruitment of seafarers,” warns Carl Schou, CEO and president of Wilhelmsen Ship Management.

By common consent in the 50 years of third party shipmanagement 2020 was the sector’s most challenging period. This year will be spent getting staff and operations back to some form of normalcy with crew welfare topping the agenda of most senior shipmanagers surveyed by Splash for today’s special 2021 preview.

“The fallout effect of this pandemic has been very damaging for the future recruitment of seafarers,” warns Carl Schou, CEO and president of Wilhelmsen Ship Management.

Schou, like others surveyed, says his company is determined to have a stronger emphasis on crew welfare this year.

“Looking back I definitely think we and the industry need to re-look the whole crewing part,” Schou says. “The pandemic has shown us a number of things which cannot be continued in a modern sustainable world.”

The Wilhelmsen executive cites Euronav’s Hugo De Stoop’s recent comments on how shipping – and crewing – have been trying to hide in the shadows.

“We need to get out of the shadows and lift the industry to something we can be proud of – something more than just finding the cheapest labour,” Schou argues, pointing out that a number of owners and charterers are taking actions to go above and beyond minimum standards.

During the later stages of the pandemic Schou has started seeing signs of crew not wanting to go back to sea. This, he says, can be attributed to a number of issues such as quarantines, the uncertainty of being able to sign-off once onboard, and the total lack of support and understanding from the general public.

Echoing Schou’s warning about potential difficulties in attracting the next generation of people to sea, Frank Coles, a former seafarer and now the CEO of Wallem Group, tells Splash: “People who have options and other means of survival will not go to sea.”

However, Coles points out there remains a large pool of people who do not have the luxury but their demands may increase in terms of salary and periods at sea.

Coles sees this in some quarters already with a reluctance of some seafarers to return to sea without a vaccine, salary increase and or a clear path home again.

“The full extent of the fallout is yet to be determined, as the pandemic is not over in terms of the abuse of seafarers,” Coles suggests.

Kishore Rajvanshy, the veteran head of Fleet Management, is also concerned about the deleterious effects the crew change crisis will have on future recruitment prospects.

“The seafarer welfare and human rights crisis brought about by the inaction of governments internationally is unprecedented. Stories of seafarers being stranded at sea and subject to forced labour conditions due to travel restrictions have certainly alarmed the masses,” Rajvanshy says, adding: “I have no doubt, this will have a long-term impact on the quality of crew joining the industry in the foreseeable future.”

On the issue of crew recruitment concerns post-pandemic, Mark O’Neil, the president of Columbia Shipmanagement, argues there will always be sufficient numbers of people wanting a career at sea – by desire or by necessity. That’s not the problem – it’s more about securing the right candidates.

“What we want to try to achieve as a sector is that we attract the right people,” O’Neil stresses.

This is important, O’Neil says, not just for the time those people are at sea, but also for when they come ashore and fulfil the equally important shore-based roles.

“We have to better identify and communicate with our crews. We have to ensure that they receive the best training, catering, mental health support, benefits, career planning, family support, human resource attention. Do that and we will get the best people into the business and retain them throughout their working lives for the benefit of the sector as a whole,” says O’Neil, who is also president of shipmanagement association InterManager.

Andrew Airey, managing director of Bangkok-based shipmanager Highland Maritime, believes that the obvious damage to future crew recruitment may well be balanced by the real need for seafarers to earn a living in the tough economic times ahead, for everyone.

While Rajesh Unni, the CEO of Synergy Group, is pleased the United Nations and a host of countries have designated seafarers as key workers, he wants to find out what this classification means in practice.

“This is the acid test for 2021,” Unni suggests. “Will seafarers be near the top of the list for vaccinations, for example? How will their human rights and health be protected as governments respond to this new variant of Covid-19?”

These are the tangibles, Unni says, which will show if the world has moved on from the “inhumane” treatment of crew in 2020.

“My glass is half full and I’m optimistic that 2021 will be better for crews as well as for shipping and the global economy. But it’s also clear to me that managers will need to cast the net more widely when it comes to recruitment,” Unni says.

According to the Synergy boss, the crew change crisis has demonstrated the need for a larger pool of seafarer and shore talent both in terms of nationality and gender.

This news is a total 4731 time has been read
Tags: Shipmanagement 2021, Covid 19 , lost generation of quality crew , seafarer