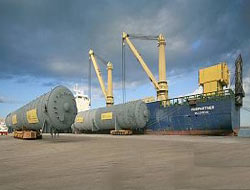 The column was manufactured by Walter Tosto Serbatoi SpA. of Ortona, Italy and is the longest and heaviest item ever made by the company in over 100 years of manufacturing.

In addition to a number of smaller breakbulk shipments, three other smaller columns were also shipped at the same time.

Advance International is the principal freight forwarder contracted by MHI to ship thousands of items of equipment which are being used to construct the complex from all over the world. When the AR-Razi V plant comes online in 2008, Saudi Methanol’s complex will be the world's largest single production site for methanol with annual production reaching 5 million tons.

Commenting on the shipment, Jawad Kamel, Advance International’s President and CEO, said: “This was one of the largest shipments ever to move through the port of Ortona and went without a hitch as a result of some careful preparation and planning by our project team.”