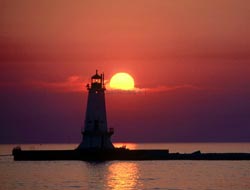 British and foreign shipowners are complaining as they mount a fresh attack on light dues that are about to be increased.

British and foreign shipowners are complaining as they mount a fresh attack on light dues that are about to be increased.

Modern cargo ships with state-of-the-art navigation systems are being forced to subsidise other craft using UK ports by paying for services they do not need, British and foreign shipowners are complaining as they mount a fresh attack on light dues that are about to be increased.

The government is preparing to raise the charges levied to cover the cost of navigational aids in the coming year at a time when shipping lines are under intense financial pressure.

A private members bill may now be introduced to Parliament proposing abolition of the light dues subsidy to the Irish Republic and a public inquiry into the three lighthouse authorities that are responsible for navigational safety around the British Isles.

Lord Tony Berkeley, who has agreed to table the bill, is investigating whether cross-party support can be obtained and is also seeking a Member of Parliament who would champion the legislation in the House of Commons.

The Independent Light Dues Forum, which has been lobbying for a more equitable system for many years, claims the planned tax rise is the result of poor investment returns by the government that have seriously depressed the value of a reserve fund set aside as a contingency to cover pensions and other emergencies.

To make matters worse, shipowners are having to contribute much more towards the highly controversial subsidy to the Irish government because of the appreciation of the euro against the British pound. The size of the annual levy is expected to virtually double to around £16m in the fiscal year 2009/10, according to ILDF spokesman Mark Bookham of Wallenius Wilhelmsen Logistics.

The Department for Transport is expected to announce next month an increase of 4 pence to 39 pence per tonne in light dues that will add significantly to ship operating costs.

A large containership already pays around £12,500 per UK port call, up to a maximum of seven visits a year after which the fee is capped. But for a ship deployed in the longhaul trades such the Asia-Europe route, that is likely to account for every call during the year, whereas a ferry would start to benefit from the levy ceiling very quickly.

The ILDF, which represents Maersk Line, WWL, and the three big Japanese lines NYK, K Line and MOL, believes costs could be saved by amalgamating the three lighthouse authorities; Trinity House which is responsible for navigational aids around the coasts of England and Wales; the Northern Lighthouse Board for Scotland; and the Commissioners for Irish Lights.

Although that would be fiercely resisted by the trio, the ILDF hopes that they would welcome the chance to present their side of the argument.

?The air has to be cleared,? said ILDF spokesman Mark Watts, ?We need a long-term solution? that would bring to an end the tension between the two sides.

Shipowners say they would like to have a say in how the lighthouse authorities are run and be part of any reforms.

The lobby group also believes the reserve fund is unnecessarily large, even though it is thought to have fallen by about 27% over the last year to £80m because of losses on its share portfolio.

The contingency fund includes about £40m set aside to cover pension liabilities in the event that income from light dues falls.

These liabilities were to have been ringfenced under a proposal contained in the Marine Navigation Bill.

But that bill was not mentioned in the recent Queen"s speech setting out the government"s legislative agenda, leaving the whole issue in legal limbo.

Even so the ILDF, whose members account for around half the light dues revenue raised each year, does not agree that such a large reserve is needed, and is strongly opposed to planned fee increases to cover the cost of maintaining the fund at what the government believes is a safe level.

There are now fears the current rate 35 pence per tonne could go up to 47 pence in three years" time, adding an annual £21m to shipowners" costs for UK port calls in 2012.

In total, the additional outlay would amount to £42m over the coming three years, with that burden falling mostly on ships that do not need the navigational aids. Owners whose vessels have to finance light dues argue that they are paying for the safety of less sophisticated ships and boats that escape the levy because of their size.

This news is a total 600 time has been read