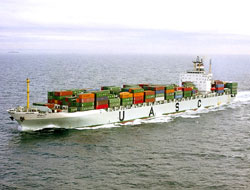 United Arab Shipping Company plans to boost its regional presence and resume services to Saudi Arabia, the UAE and Iran.

United Arab Shipping Company plans to boost its regional presence and resume services to Saudi Arabia, the UAE and Iran.

United Arab Shipping Company plans to boost its regional presence and resume services to Saudi Arabia, the UAE and Iran, as shippers reconfigure routes to target pockets of demand amid the economic downturn. UASC, based in Dubai and owned collectively by six Persian Gulf countries, will reinstate its AEC2 service, covering the Asia to Europe trade lane, which was suspended last December, The National reported.
UASC"s moves come in time for the third quarter, when shippers typically enjoy a rise in global demand from retailers preparing for the Christmas shopping season, as well as a regional boost from Ramadan.

The company said it was making the changes to offer faster services on some of its better routes.

The shipping industry is feeling the pinch of the downturn with falling orders to transport resources and automobiles, with rates down more than 50 percent from their peak one year ago.

Last week, Star Bulk Carriers, a Greek shipping line, reported a second-quarter loss of $3.4 million after revenues declined by 45 percent to $32.4 million. Star Bulk operated 12 vessels and earned an average rate of $30,000 a day for time-charters, down from $46,000 last year.

The resumption of the UASC line will include a stop in Jeddah in Saudi Arabia and Khor Fakkan on the East Coast of Sharjah as it travels from China to the Netherlands, including stop-offs in Singapore, Malaysia, Egypt, France, Belgium and Germany. The line will employ nine UASC vessels, each capable of handling 6,900 standard 20-foot containers (TEUs).

In addition, the container shipper will introduce a number of Persian Gulf ports on another service, its AEC1 line. Direct calls will be included to the Saudi Arabia"s port cities of Jubail and Damman in the Persian Gulf as well as Bandar Abbas in Iran, UASC said.

The new services cap a busy period for UASC as it has sought to find the right balance in its global network. It recently announced plans to launch an Indian subcontinent to Northern Europe route next month, serving ports in Pakistan, India, Italy, England, Germany and Belgium.

This news is a total 2449 time has been read