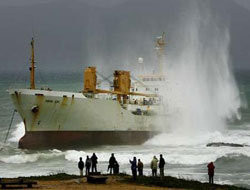 In total, 378 shipping accidents happened during the time, with343 lives lost. The death toll declined 4 percent. The number of capsized vessels also decreased to 216, down 14.6percent year on year, according to the agency under the Ministry of Transport.

The equipment, including an emergency float, powerful search light and rescue winch, will enhance China's salvage and rescue capacity both at sea and in air.

This news is a total 9837 time has been read