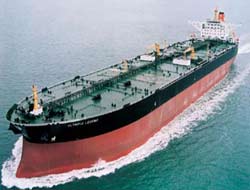 Shipping companies will increasingly face tougher conditions for financing projects even though the industry is still among the least touched by global economic problems, a senior banker told Reuters.

Shipping companies will increasingly face tougher conditions for financing projects even though the industry is still among the least touched by global economic problems, a senior banker told Reuters.

Harald Serck-Hanssen, appointed to run the shipping and offshore arm at Norway's top bank DnB NOR said shipping start- ups were more likely to struggle with raising funds than companies who had established relations with banks 'There will be a weakening (in the market), and we think that we will see several projects having troubles with receiving financing,' Mr Serck-Hanssen said in an interview.

'But shipping is one of the industries that is actually doing best in today's situation,' Mr Serck-Hanssen, due to officially take over the division from July 1, added.

Shipping, and especially dry bulk carriers, has in past quarters seen booming demand and day-rates, with a rising need for iron ore from growing economies such as China boosting profits in the dry bulk industry. But with more shipping tonnage entering the market from 2010, and supply outpacing demand, a correction is expected from 2009, further worsening in 2010, industry watchers have said.

Liquidity and financing difficulties could dampen the expected downturn, due to tonnage being delayed or cancelled.

Shipyards, some of them new, have also struggled with a shortage of skilled labour and technical difficulties, which further hamper growth in ship supply, but analysts say this will still not be enough to counteract a slowdown.

'We have seen that many ship yards are starting to have problems with providing refund guarantees,' Mr Serck-Hanssen said.

He said the nature of the capital intensive industry was a challenge although even with weaker markets many could deliver good results.

'We think the market in most segments will come down, but both tanker, offshore and especially the dry bulk market is today at historically high levels, so it may come significantly down and still see good earnings,' he said.

DnB NOR, Norway's biggest bank worth US$18 billion, is the largest Norwegian lender to the North Sea country's vast offshore and shipping industry, and among the largest competing internationally.

As of the first quarter of 2008, net lending to shipping, offshore and logistics was 108 billion crowns (S$28.5 billion).

This news is a total 790 time has been read