Shipping Investors Can Still Create Heat In The Big Freeze 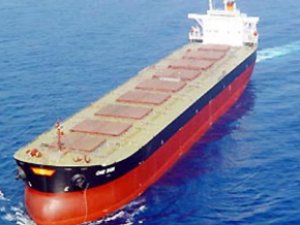 In the hit Disney movie ‘Frozen’, Olaf is a snowman who lives in a world of cold but dreams of experiencing the heat of the summer.

In the hit Disney movie ‘Frozen’, Olaf is a snowman who lives in a world of cold but dreams of experiencing the heat of the summer. The shipping markets have been, in the main, fairly icy in the years since the economic downturn, but during that time shipping market investors have intermittently dreamt of sunnier times and turned up the heat, so how ‘frozen’ up has the shipping market really been?

Like the eternal winter in the film, the shipping markets have been fairly iced up in recent years. The ClarkSea Index has traditionally been a good way of taking the temperature of industry earnings, 2014-12-19_upload_1380780_SIW 1152measuring the performance of the key market sectors. Since Q4 2008 it has averaged $11,933/day, compared to $23,663/day in the period from the start of 2000 to the end of Q3 2008. However, earnings aren’t the only ‘hot thing’ in shipping.

Investment in ships can blow hot and cold, and funds invested in newbuild and secondhand tonnage give an idea of the ‘heat’ generated by investors. To take this into account, the analysis here has created the ‘Shipping Heat Index’, which reflects not only vessel earnings but also the level of investment activity. 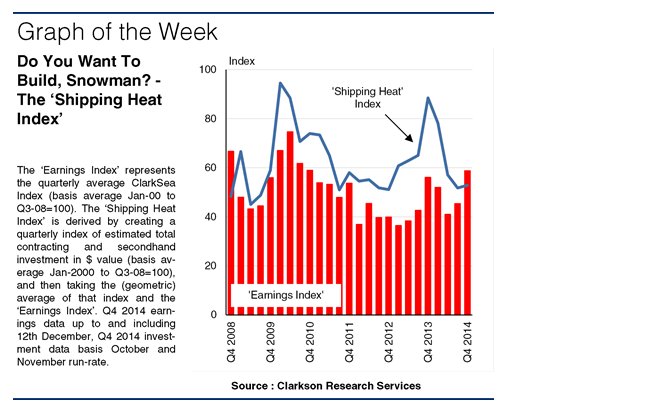 The graph shows quarterly ‘Earnings’ and ‘Heat’ indices together, and illustrates a number of points. Firstly it shows that in the post-recession period (relative to the average before the downturn) the ‘Shipping Heat Index’ has stood at a higher level (an average 63% of pre-recession ‘heat’) than the ‘Earnings Index’ (an average of 50% of pre-recession levels). Whatever the state of the markets, shipping investors have dreamt of greater warmth and invested in capacity, often attracted by counter-cyclical opportunities at historically low prices, or the perceived benefits of new ‘eco’ tonnage.

Secondly, it is clear that the ‘Shipping Heat Index’ has had two discernable peak periods in the post-recession era. In 2010 and early 2011 it stood well above the ‘Earnings Index’, peaking at 95 in Q1 2010 compared to the latter’s 67. It did the same in 2013 and 1H 2014, peaking at 89 in Q4 2013 (compared to 56). In these periods investment in capacity surged, with investors generating heat even if earnings looked a bit more frosty.

Thirdly, in Q4 2014 the relative position of the two indices has switched for the first time since Q4 2008. The Q4 value of the ‘Shipping Heat Index’ stood at 53 with the ‘Earnings Index’ at 59. The ClarkSea Index topped $16,000/day in November, with tanker earnings surging and gas carriers still performing strongly. Meanwhile, the investment scene has frozen up a little, with newbuild ordering now a lot slower than in 2013 and early 2014.

So, even when shipping markets appear ‘frozen’, investors can still generate ‘heat’, and even in icy conditions snowmen dream of summer. With earnings rising, dreamers might be tempted again next year. The only danger is that too much heat can lead to a spot of melting if you’re not careful! Merry Christmas.

This news is a total 1396 time has been read
Tags: Diney, Forzen, Ship, summer, market