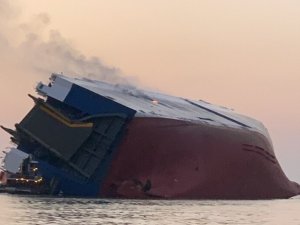 Although total losses were down, the number of shipping incidents increased 5 percent to 2,815 in 2019, driven primarily by machinery damage which caused over one in three incidents.

“The rise in number and severity of claims on ro-ro vessels is concerning. Ro-ros can be more exposed to fire and stability issues than other vessels,” says Captain Rahul Khanna, Global Head of Marine Risk Consulting at AGC. “Many have quick turnarounds in port and a number of accident investigations have revealed that pre-sail away stability checks were either not carried out as required, or were based on inaccurate cargo information. Too many times commercial considerations have endangered vessels and crews and it is vital that this is addressed on shore and on board.”

There were almost 200 reported fires on vessels over the past year, up 13 percent, with five total losses in 2019 alone, the report noted. Mis-declared cargo is a major cause, according to Allianz.

Taking steps to address this issue is vital as it will only worsen as vessels become bigger and the range of goods transported grows, said Allianz. Chemicals and batteries are increasingly shipped in containers and pose a serious fire risk if they are mis-declared or wrongly stowed.

The annual AGCS study analyzes reported shipping losses over 100 gross tons (GT). It also identifies 10 challenges of the coronavirus crisis for the shipping industry, such as the crew change crisis driven by challenges related to the COVID-19 pandemic.

“Ship-owners also face additional cost pressures from a downturn in the economy and trade,” says Captain Khanna. “We know from past downturns that crew and maintenance budgets are among the first areas that can be cut and this can impact the safe operations of vessels and machinery, potentially causing damage or breakdown, which in turn can lead to groundings or collisions. It is crucial that safety and maintenance standards are not impacted by any downturn.”

Rising geopolitical tensions, emissions rules and decarbonization targets, mis-declared cargo and fire incidents continue to pose risk challenges. Meanwhile, an uptick in incidents of piracy in the Gulf of Guinea region and cyber attacks are also a concern, the report shows.

This news is a total 1298 time has been read
Tags: allianz, shipping losses, Turkish maritime news