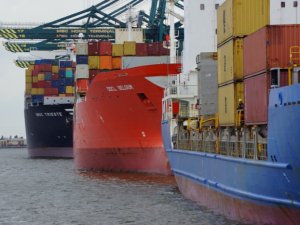 All operations in the river Scheldt and terminals at the Port of Antwerpen, Belgium, have been resumed, following the crane collapse at DP World Antwerpen’s quay on Monday afternoon, December 9.

The incident occurred after a moored containership, identified as APL Mexico City, broke free from its moorings and slammed into a crane at the terminal, causing the crane to crash down with some of the infrastructure ending up in the water.

According to DP World Antwerp, there have been no injuries reported despite the massive damage. The coast guard managed to secure the ship and moor it again with the assistance of several tugs dispatched to Deurganck dock.

The ship sustained significant damage in the collision and will need to undergo repairs before it sets sail again.

The coast guard added that a second ship, the MSC Anchorage, also threatened to break loose from its moorings. As a precautionary measure, a tugboat was sent to the scene to hold the ship in place.

This news is a total 164 time has been read
Tags: APL Mexico City, Port of Antwerp.