Ships Are Skipping China and It’s Causing Turmoil for Trade 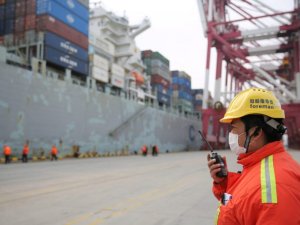 February 2020 will come to be remembered as a period of historic disruption to physical supply chains the world over, as the coronavirus wrecks trade.

Dozens of export sailings to ship China-made goods to consumers from the U.S. to Europe — think handbags, flat-screen TVs, and plastic toys — have been canned since the coronavirus crisis escalated last month. Those non-shipments are part of a much bigger picture in which every aspect of global shipping — from oil and gas through to dry-bulk commodities — has been upended.

The unprecedented gyrations caused by the virus matter because 90% of all trade moves by sea and China has grown into the maritime industry’s main source of cargoes. The disruptions have left toy makers like Hasbro Inc. and fashion houses like the owner of Michael Kors, Versace and Jimmy Choo struggling with their supply chains. Vessels are idling. And exporters to China face diversions as clients there use force majeure clauses in their contracts to walk away from commitments to buy cargoes.

“All the signs are that there has been a major dislocation in global supply chains and commodity trade as well,” said Caroline Bain, chief commodities economist at Capital Economics. For some products “it’s only going to get worse in February data.”

Even at a most-basic level, shippers are struggling to sort out the necessary paperwork required for shipments involving China, snarling some trades in an industry where many transactions need physical documentation to accompany consignments.

All this has come about because the virus has led to hundreds of millions of people being told to stay away from work or education in China, squeezing output in the world’s fastest-growing major economy.

Container vessels that routinely move goods worth hundreds of millions of dollars in single shipments are at the sharp end of the turmoil. The number of blank sailings — where ships don’t load at a planned location — has jumped since the outbreak began. AP Moller-Maersk A/S, the world’s largest shipper, has listed at least 27 blank sailings since Jan. 31 on its website.

Almost 600,000 20-foot boxes are currently out of action as a result of the virus according to Alan Murphy, chief executive officer of container shipping analysis company Sea Intelligence, up from about half that amount just under a week earlier. Though rates can vary, using an estimate of $1,000 per container, that means shippers had to stomach a hit of $600 million this week. Ships may either be slowed down in the hope that demand improves in future weeks, or idled until things turn around, Murphy said.

Toy maker Hasbro said in earnings this week that the virus is disrupting its commercial operations in China — from where it had already been seeking to diversify its supply chain as a result of the trade war. Capri Holdings Ltd. — which owns Michael Kors, among other brands — said its outlook may be impacted by the outbreak as it wrestles with potential supply chain issues.

There’s a knock-on effect for exporters in other nations too. Containers are typically used in U.S. and other regions to carry those countries’ exports. The lack of liners hauling containers from Asia, may soon mean countries like the U.S. face a shortage. It’s already getting a little more difficult to get empty ones in Canada, said Greg Northey, a spokesman for industry group Pulse Canada.

Nor is it just retailers. Last week, Hyundai Motor Co. temporarily halted some of its car production because of component shortages caused by the virus. Fiat Chrysler Autombiles NV is planning to halt operations at its assembly plant in Serbia due to a lack of parts from China because of the coronavirus, people familiar with the matter said.

The issues afflicting shippers of finished goods are also being felt in energy and commodity markets.

Traders of oil from West Africa, Latin America and the North Sea initially reported weaker demand from China, while some buyers of Saudi Arabia’s barrels have asked to get less than they would normally take for March. There were signs that falling crude prices encouraged some refineries in the Asian country to accelerate purchases.

In gas markets, a one Chinese company declared force majeure, potentially allowing it to walk away from contractual commitments. The measure was rejected by Total SA and Royal Dutch Shell Plc. There are now 12 empty liquefied gas carriers sitting off the coast of Qatar, one of the world’s biggest producers. While the precise reasons for the idling vessels aren’t known, the timing coincides with ship diversions, cargo cancellations and reduced demand in Asia since the virus took hold. Oil tankers have been dawdling off China.

Chinese buyers of liquefied petroleum gas that’s used in cooking and heating are re-offering and diverting cargoes elsewhere because of weakening demand.

On top of that, shippers of bulk commodities like coal and iron ore have been battered as the virus delayed the resumption of demand after the typically slow China Lunar New Year period. Day rates for giant freighters to move the two cargoes are earning less than $2,500 a day — a fraction of what they need even to pay their crew.

“You obviously have lost demand that it’s difficult to recapture,” said Frode Morkedal managing director of equity research at Clarksons Platou Securities AS, an investment banking unit of the world’s biggest shipbroker. “You can’t discharge your ship, you can’t load as fast as you want, so it’s impacting the global supply chain.”

This news is a total 322 time has been read
Tags: coronavirus Konecranes Announces 2,000 Temporary Layoffs in Finland amid COVID-19 ImpactFinnish Konecranes has unveiled intentions to temporarily lay off some 2,000 employees as a result of coronavirus impact on the company’s operations.