Ships float outside the harbours 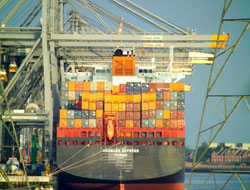 453 container ships, 11% of global capacity, now float outside the harbours of Hong Kong, Singapore and other South-East Asian ports.

453 container ships, 11% of global capacity, now float outside the harbours of Hong Kong, Singapore and other South-East Asian ports.

Like unwelcome guests who will not leave, 453 container ships, 11% of global capacity, now float outside the harbours of Hong Kong, Singapore and other South-East Asian ports. They are unwanted by their hosts as well as their customers. In recent days China has quietly let it be known that it wants to rid its territorial waters of these nautical squatters. Only five years ago huge demand from China meant that all these ships, and more, were desperately needed. This had a dramatic impact first on shipping rates, and then on supply (see chart). Between the end of 2006 and July 2008, shipyards received enough commissions to double the world"s fleet. Now these new ships?more than 9,000 vessels?are taking to the water just as demand has collapsed. The world is awash with ships.

To see how the recent boom and bust has affected value, a Hong Kong broker cites a 150-tonne ?Cape class? ship that sold in 2003 for $18.5m in the used market. Critical to the price was the prevailing charter rate, then $15,000 a day. By last summer this had risen to $175,000 a day, and an identical ship sold for $85m. Rates peaked shortly thereafter at $300,000. Today rates are back where they were in 2003. Rather than try to find a buyer for another identical ship, albeit one that needed repairs, the owner dumped it for $7m to be used as scrap.

Orders for new ships have, not surprisingly, collapsed and scrutiny has shifted from what can be bought to what can be cancelled: nothing, it turns out, without great effort. South Korea"s shipyards, the global leaders, have learnt from previous busts. They typically demand 20% up front, a further 60% during construction, and the final 20% payment upon delivery. Walk away and you lose a fortune.

These shipyards have good reason to play tough. Along with a loss of revenue, cancellations cause operational chaos. Worse still, orders are booked in dollars, but to cover local production costs shipyards buy forward currency contracts, transforming their obligations into won. The contracts are paid off in dollars by the buyers. But what if the buyer cancels? Analysts are warning that the resulting demand for dollars to unwind currency contracts, estimated at $10 billion-30 billion, will put further pressure on the won.

Buyers, meanwhile, have their own pressing problems. Martin Stopford, managing director of Clarkson Research, a maritime-research firm, estimates the backlog in shipyards at $526 billion. Some of this comes with first-class payment guarantees, but not all. That requires large amounts of credit, largely from banks which are hardly in a generous mood and are fully aware that their collateral, if the buyer stumbles, has just depreciated.

Given mutual interest in survival, yards and ship owners are no doubt discussing delays. These talks are typically kept quiet, but Cosco Singapore, a big shipbuilder, recently said that the construction of 30 bulk carriers had been deferred or cancelled. Steve Man, an analyst at HSBC, says this is the tip of the iceberg. He thinks more than half the deliveries for 2010 will be delayed?and shipyards will agree because the alternative is no work after 2011.

Weaker shipyards are already being weeded out. Two South Korean shipyards that started up in response to the boom have recently collapsed: SNC Shipbuilding defaulted on a key loan on March 17th, and C& Heavy Industry said on March 24th that a Malaysian buyer had emerged to take over its assets. Many new shipyards are thought to have closed in China without so much as a yelp.

Theoretically the fall in prices should trigger a contraction of supply, as older ships are scrapped and new orders are cancelled. In practice, however, shipyards usually complete ships that are under construction, even if the buyer walks, in the hope of selling them to someone else.

And shipbuilders have strong government support: in China they are beneficiaries of the $585 billion stimulus package, and domestic firms are being encouraged to pick up any orders cancelled by foreign buyers. Not to be outdone, India and Vietnam are subsidising the expansion of their own shipbuilding operations. More new vessels will merely widen the circle of losses, extending it from builders to shipping lines themselves, and back to even the strongest builders as competition intensifies. Rather than a bail-out, what the industry really needs is for some participants to sink.

This news is a total 2270 time has been read