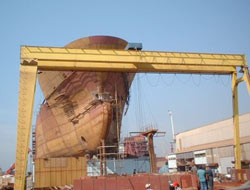 Three rival Washington shipyards have reached an agreement that might end a long political and legal wrangle over a contract for four new state ferries.

Tacoma"s Martinac would be subcontractor under planned contract bid.

Three rival Washington shipyards have reached an agreement that might end a long political and legal wrangle over a contract for four new state ferries.

The agreement calls for Todd, the largest of the three shipyards, to be the prime contractor for the four 144-auto ferries. Martinac and Nichols Brothers would be subcontractors.

?This is a major, major accomplishment,? said Department of Transportation communications director Lloyd Brown. ?Everyone who"s been involved in this project is excited at the prospect of getting this moving again.?

Martinac had fought, both in the Legislature and in administrative appeals, to clarify the rules under which the state Department of Transportation awarded the contract.

Todd appeared to have won the contest two years ago, but Martinac appealed the DOT"s disqualification of its Tacoma shipyard from the bidding and won before an administrative law judge.

The Legislature, anxious to get the long-delayed ferry project moving, this spring passed legislation giving the three yards 30 days in which to agree on a unified bid.

The state had budgeted $342 million for the four-boat project. The Department of Transportation expects to review the shipyards" bid over the next several weeks to determine whether it meets the state"s needs, said Brown. If it does, the state will begin the process of drafting contracts and getting the project started.

This news is a total 1155 time has been read