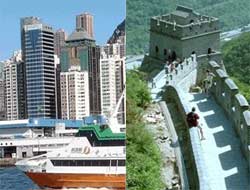 As a result of negotiations with a purchasing delegation that came to Turkey from China, short and medium-term export contracts worth 1.5 billion dollars were signed.

Export agreement between Turkey and China

As a result of negotiations with a purchasing delegation that came to Turkey from China, short and medium-term export contracts worth 1.5 billion dollars were signed.

The discussions were held with a 35-member Chinese purchasing delegation, which included senior officers from China's most prestigious public purchasing firms intent on making contacts in Turkey. The negotiations turned out to be quite successful.

The Assembly of Turkish Exporters organized the meetings which resulted in Turkish companies signing one year export contracts with the Chinese purchase delegation worth 300 million dollars for such products as iron-steel, chrome, zinc, borax, marble, wool, textiles, olive oil, hazelnut and hazelnut products.

In addition to the short-term contracts, Eti Chrome Inc. reached a 1.2 billion dollar long-term agreement for chrome and ferrous chrome, which brought the total value of the contracts Turkey made with the Chinese purchasing delegation up to 1.5 billion dollars.

Some of the firms on the list of China's 500 biggest companies and which were part of the Chinese purchasing delegation that visited Turkey included Sinochem, China Minmetals, China Textile Resources and China National Chemical. Garage Group, Promexs, Eti Chrome and CVK Group were among the Turkish companies that participated.

This news is a total 581 time has been read