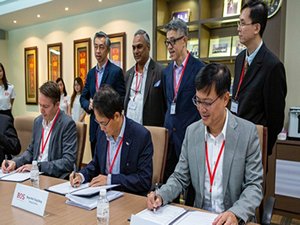 Singapore is taking a lead in developing hybrid-electric propulsion technology for offshore support and harbour vessels, in a bid to reduce emissions and lower operating costs.

As BOS electrification manager Ma Shiao explained during a Riviera Maritime Media webinar in July, the scope of this co-operation will include integrating hybrid-electric solutions, testing and certification.

During the How can Asia advance adoption of hybrid, electric and fuel-cell technology? Webinar, he explained that knowledge gained from this project would support Singapore’s ambition to adopt hybrid-electric propulsion systems for its maritime and offshore industry.

Under a memorandum of understanding (MoU), BOS will provide technical and commercial expertise in the development of commercially viable hybrid-electric propulsion and plug-in power systems for small- to medium-sized vessels operating in and around Singapore.

Penguin International will design, construct and commission a newbuild hybrid launch vessel with the BOS electric propulsion (EP system) installed and will operate this vessel on commercial routes.

Danfoss and Durapower will support the testing and integration of their power drivetrains and energy storage systems respectively with the BOS EP system.

Within the MoU, BV will review test facilities and procedures necessary for the certification of the BOS EP system and class the resulting launch as a hybrid vessel.

BOS will also develop the Marine Electric Integration Centre to forward initiatives towards the digitalisation of vessel operations, with data analytics capabilities and smart connectivity features.

Mr Shiao said BOS had designed a series of mathematical models to answer the following questions: How do you know one ship is ‘greener’ than another? Is the hybrid electric design optimised in terms of equipment siting and control? What will be the vessel’s performance after the design limitation? The model considers various operational factors such as slow-speed operations, long loiter time, high torque at low speeds and near-shore operations.

“Shaft torque and speed are the most important parameters when designing an electric and hybrid system,” said Mr Shiao.

For OSVs with dynamic positioning (DP) it would also be important to have a back-up source of power. “Oceangoing vessels with DP should have redundant generators, so reliable batteries would be required,” he said. Batteries could be used with the generator off, or could supplement power.

He expects BOS will help in the development of a complete electrification ecosystem in Singapore.

He noted BOS was willing to share this experience and was available to work with partners in the design and construction of electric and hybrid vessels.

Singapore Maritime Institute executive director Sanjay Kuttan said Singapore was becoming a leader in the development of hybrid-electric vessels as part of its drive to decarbonise harbour operations.

“We are building a market here,” said Dr Kuttan. “We are looking at the demand side and supporting the local market with a good supply chain that feeds into manufacturing.”

These experiences, coupled with the supply chain, would help provide hybrid-electric vessels for different markets, such as ports and offshore in other Asian nations, he said. “China, Vietnam and Thailand are big enough markets,” Dr Kuttan said, noting that companies need to identify the early adopters or first movers for hybrid-electric propulsion.

“Performance envelopes are important for the particular use case,” he said. There also needs to be input from authorities to drive the development of technology and its adoption.

“We need policymakers to use sandboxes to test and understand the new technology and then develop new policies from that point,” said Dr Kuttan.

DNV GL – Maritime Advisory principal consultant and head of research and development Imran Ibrahim said Asia was lagging behind in the adoption of electric and hybrid propulsion.

He said: “Battery take-up in the maritime space is still quite low. When it comes to where batteries are utilised, Asia is still lagging behind compared to other geographies.”

He said of the total number of global vessels with batteries, only 2.2% operate in Asia. This translated into 10 vessels, compared with 179 in Norway, 96 elsewhere in Europe and 29 in America. Further development of battery technology would enable more vessels to be built with hybrid-electric propulsion for different performance envelopes in offshore.

Spear Power Systems commercial director Jon Diller said the time is right to adopt hybrid and electric propulsion, as early adopters would be well positioned to benefit from a predicted leap in battery technology in the next 10 years.

“Expect around a 30% improvement in energy density to be introduced in the next two to three years,” he said.

“People need to purchase lithium-ion batteries now and learn how to use them,” he said. “Most importantly, they need to know how to integrate an ecosystem of suppliers.”

Hybrid-electrical power plants can be alternating current (AC), direct current (DC), or a mix of both. “Multiple sources of power can be combined on a common DC bus to form a DC grid which supplies a variable frequency AC motor via a motor drive (or inverter),” said Mr Lui.

Seacor Marine upgraded the platform supply vessel Seacor Maya with lithium-ion batteries in May 2018, in co-operation with Kongsberg Maritime and Corvus. Together they developed a plan to integrate the battery system with the ship’s control and power management.

Mr Lui said this conversion had “potential to reduce fuel consumption by as much as 20%.”

Harvey Gulf retrofitted Harvey Energy with batteries and a converter system. This was the first ABS-classed dual-fuel and battery vessel and the first US-flagged OSV equipped with a battery/converter system, said Mr Lui. He said ABS provided the ESS-LiBattery notation for both vessels.

“These projects enhanced efficiency and environmental performance, reducing exhaust emissions, fuel consumption and noise levels,” he said. These are among the benefits that early adopters can secure as hybrid propulsion technology matures and is further adopted.