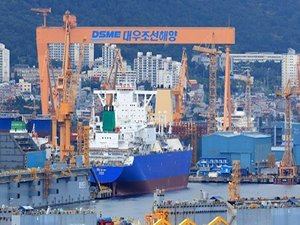 It was one key hurdle in the plan that would create the world’s largest shipbuilder with a market share possibly as high as 20 percent.

In its announcement, the CCCS said, “After evaluating all the evidence available, CCCS assessed that the proposed transaction, if carried into effect, will not lead to a substantial lessening of competition in Singapore.”

In March 2019, Hyundai Heavy Industries (HHI) Group and Korea Development Bank (KDB) signed a definitive agreement to acquire Daewoo Shipbuilding & Marine Engineering (DSME) in a deal valued at that time at $1.78 billion. Under the terms of the agreement, Korea Shipbuilding & Offshore Engineering (KSOE), which will be established as a sub-holding company spun off from HHI to control the group’s shipbuilding companies. HHI Group reported that its post-acquisition strategy was to have its four shipyards, which would include DSME, focused on design, manufacturing and sales activities, which will be controlled by KSOE which specialized in R&D and engineering. The size and complexity of the deal however requires approval from Japan, Singapore, China, Kazakhstan and the European Union.

CCCS said the deal was referred to it in September 2019 for a decision if it would infringe on the competitiveness rules within any market in Singapore. The commission however ruled in January 2020 that the proposed transaction would require an in-depth review. The review focused on the largest vessels and the potential overlap for tankers, containerships, LNG and LPG vessels.

The commission found that there are high barriers to entry and for expansion required to compete in the construction of these types of vessels. It said that while the customers are a limited group of large shipping companies it believes that the shipping companies continue to have buying power to constrain the combined shipbuilders influence over the market. They also believed that there are other viable alternative suppliers and that those alternate shipyards had capacity to provide an alternative to the combined Korean shipbuilders.

After its review and interviewing customers and other parties in the shipping industry, the CCCS reported that while it believed there would be a higher market concentration from the merger, they did not believe it would result in coordination or collusion on pricing.

Singapore’s decision is just one of many that the merger requires and they may still face a stiff battle with the EU to gain approval. Late in 2019, the European Commission announced that it had opened an in-depth investigation based on its concerns that the merger may reduce competition in various global cargo shipbuilding markets. Based on delays gather information, in part due to limitations as a result of the coronavirus, the EU has on several occasions suspended the review process. Originally expected to be completed by September, estimates are that the EU might not announce its decision before 2021.

This news is a total 2215 time has been read
Tags: Singapore Clears Proposed Korean Shipbuilding Mega-Merger