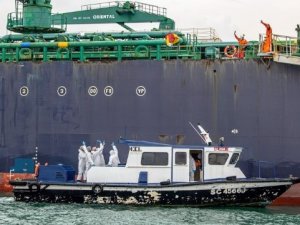 "During this pandemic, seafarers have been working tirelessly to keep our ports open and cargoes flowing,” said Senior Minister of State for Transport and Health Dr. Lam Pin Min.

Marking the Day of the Seafarer, the Maritime and Port Authority of Singapore (MPA) undertook several initiatives designed to assist seafarers in the port as well as highlighting its on-going efforts to facilitate crew changes and provide support to the maritime community.

The MPA has established a controlled and regulated environment to provide a safe corridor for crew members while also minimizing the risks to public health. Since the end of March, the MPA has approved more than 13,000 cases of crew sign-ons and sign-offs involving some 650 companies and 1,150 ships. Nearly half of these crew changes involved tankers while the remainder was divided nearly evenly between container ships and bulk carriers. Approximately 100 of the seafarers required medical attention on shore while most passed through the port joining or leaving their vessels.

As part of the crew change efforts, since mid-June, Singapore has been using telemedicine consultations to further ease the process required to assess crew members. Instead of arranging for doctors to go onboard to confirm that the crew is fit-to-travel, a clinical assessment can be done via real-time video using end-point devices.

In addition, the MPA is providing several other unique services. Working with local businesses, they have been creating 3D-printed face coverings. These masks are being given to signing-off seafarers for their added protection during the journey home.

"During this pandemic, seafarers have been working tirelessly to keep our ports open and cargoes flowing,” said Senior Minister of State for Transport and Health Dr. Lam Pin Min. “Today, we join the international maritime community to celebrate this important Day of the Seafarer and thank our seafarers for their contributions. Through facilitating crew changes, a financial contribution to seafarers’ missions, as well as the adoption of new technology such as 3D printing, drones, and telemedical consultation, Singapore is glad to play our part to bring some relief to seafarers calling at our shores."

Celebrating the Day of the Seafarer, the MPA working in conjunction with the Singapore Maritime Officers' Union, Singapore Organization of Seamen, and Singapore Shipping Association reached out to the estimated 10,000 seafarers in the port and prepared and distributed 1,000 care packs for ships in the Port of Singapore.

In addition to the care packages that were handed out to seafarers signing off at the Marina South Pier, care packs were also delivered to a PIL vessel, the Kota Nasrat, using a drone. According to the MPA, this shore-to-ship delivery demonstrated the use of new technologies to enhance the safety and efficiency of deliveries traditionally performed by small launches or boats.

The MPA also contributed S$200,000 to seafarer missions in a ceremony with the Mission to Seafarers Singapore. The grant will be distributed to the Norwegian Seamen’s Mission, the Danish Seamen’s Church, and the International Lutheran Seafarers’ mission, in support of their work including counseling services and pastoral care, ship visitations and on-demand transportation for seafarers.

This news is a total 1449 time has been read
Tags: Singapore Observes Day of the Seafarer Completing 13, 000 Crew Changes