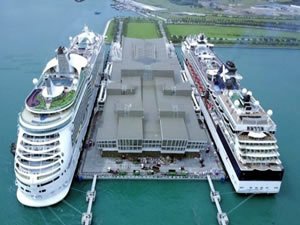 The Singapore Ministry of Health cleared Royal Caribbean International’s cruise ship the Quantum of the Seas to disembark its passengers after reporting that it received negative test results for the passenger suspected of having COVID-19.

They believe that the health protocols developed by the government with DNV GL worked as planned.

The situation began when an 83-year-old male passenger went to the hospital on the ship for other symptoms and as part of the health protocol was also given a mandatory COVID-19 test that came back as positive. At around 2 am the captain made a public announcement to the passengers and asked everyone to go to their cabins while the ship returned to Singapore ending its cruise to nowhere one day early.

After arriving in Singapore, the passenger suspected of having the virus was transferred by ambulance to a hospital. The Health Ministry reports that the National Public Health Laboratory re-tested the original sample and conducted an independent test. Both results were negative.  Although the individual is not showing signs of the virus, they will conduct another test tomorrow to confirm his COVID-19 status.

Aboard the Quantum of the Seas, which had 1,680 passengers aboard as well as 1,148 crew, they undertook contact tracing and also tested all of the close contacts of the passenger. All of those tests were also negative for the virus. The negative results were in keeping with Singapore’s overall experience where local transmission of the virus has largely been eliminated. Also, all of the passengers had to test negative before boarding the four-day cruise.

Passengers on the Quantum of the Seas, however remained aboard the cruise ship into the evening while a second cruise ship, the World Dream, was boarding passengers for its cruise. The authorities from the Singapore Tourism Board did not want to crowd the terminal and risk contact between passengers from the two ships. The plan had been to test all of the passengers disembarking the Quantum of the Seas. Disembarkation was scheduled from approximately 6 to 11 pm tonight.

As a precaution, Royal Caribbean International announced that the scheduled cruise due to depart Singapore on December 10 on the Quantum of the Seas was also canceled. The cruise line said that the ship would be given a deep cleaning and that all crew members would be tested for the virus tomorrow.

Unfortunately for the passengers, the cruise line, and the industry, it is not the first instance of a disputed result from testing causing a scare and implementation of safety procedures. TUI Cruises had a similar situation aboard its cruise ship in Greece, where one test came back positive, but later tests administered in Piraeus cleared the suspicion. During the summer, Sea Dream Yacht Club had a brief incident when a past passenger tested positive after disembarking but was later cleared. In Alaska, UnCruises during its first cruise had a passenger during the trip who learned of a positive test at the airport before boarding the cruise. The passenger tested negative days later in Juneau, but the line decided to cancel its Alaska cruise season.

The Singapore Government said it would be closely monitoring the cruises which it viewed as a pilot program. It also said that it would suspend the operations if the health and safety protocols were not followed.