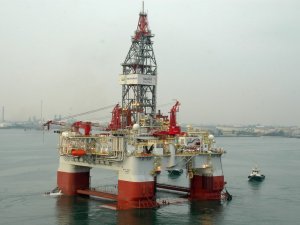 Sembcorp Marine Ltd., the world’s second- largest builder of oil rigs, posted its first quarterly loss in at least 12 years after it took a one-time charge and as plunging oil prices pushed customers to delay or cancel orders for offshore drilling project

The net loss in the fourth quarter totaled S$537 million ($384 million), the Singapore-based company said in a statement Monday. The company took impairment charges and provisions of S$609 million for projects of its client Sete Brasil Participacoes SA and others. It’s the first quarterly loss since the company started reporting data in 2003, according to Sembcorp Marine’s website.

Builders of floating facilities for drilling and production have reported losses in recent quarters as oil plunged more than 40 percent in the past year, leading companies to cut spending and cancel orders. Sembcorp Marine’s bigger rival Keppel Corp. was also hit as Sete Brasil, a major customer for the two Singaporean companies, is running out of funds and hasn’t paid both rigbuilders for more than a year. Keppel said in January it took a charge of S$230 million because of Sete Brasil.

“This downcycle is expected to be more protracted than previous cycles,” Sembcorp Marine said in the statement.

Shares of Sembcorp Marine gained 2.8 percent to close at S$1.46 before the earnings announcement. The stock has fallen 52 percent in the past 12 months, the second-worst performer on Singapore’s Straits Times Index.

Keppel and Sembcorp Marine face the risk that clients will ask for further delivery delays or cancellations and that new orders will dry up. Crude oil is trading at levels not seen in more than a decade. The commodity traded at $29.43 as of 5:45 p.m. in Singapore.

Keppel said last month it halted work in the fourth quarter on projects for Sete Brasil. The Brazilian client has $10.5 billion of orders placed with Keppel and Sembcorp but hasn’t paid either company since November 2014.

More than half of the S$609 million set aside as impairment and provisions in the last quarter was for Sete Brasil’s orders, Sembcorp Marine said.

Sete Brasil ordered six semi-submersibles from Keppel and seven drillships from Sembcorp Marine in 2011 and 2012, most of which were to be built at their yards in Brazil. These account for about 40 percent of the companies’ orderbooks, according to Nomura Holdings Inc. and DBS Vickers Securities. The first units from each builder are scheduled to be delivered in the first quarter of this year, according to a Jan. 5 report from Macquarie Group Ltd.

Sete Brasil fell into financial distress after it was unable to secure long-term financing amid allegations of kickbacks to its only client, state-run oil producer Petroleo Brasileiro SA, or Petrobras. Creditors have repeatedly rolled over Sete Brasil’s loans since October 2014 to help it stay afloat, according to people familiar with the matter. Sete Brasil is among more than a dozen companies that have been crippled by the Petrobras corruption probe.

Other Sembcorp Marine clients also are canceling orders. Sembcorp Marine is in a dispute over an order its subsidiary PPL Shipyard Pte received to build a jack-up rig for $214.3 million in February 2014. A unit of Marco Polo Marine Ltd. terminated the contract after it found cracks on all three legs of the rig, and is seeking a refund from PPL of about $21.4 million. The rig builder filed a case against Marco Polo in the Singapore High Court.

U.S., China Move Closer to Trade Deal Despite Harsh RhetoricThe U.S. and China are moving closer to agreeing on the amount of tariffs that would be rolled back in a phase-one trade deal despite tensions over Hong Kong and Xinjiang, people familiar with the talks said.

How the Trade War and a Changing China Are Roiling Global ShippingBy Ann Koh and Serene Cheong (Bloomberg) –The trade war and China’s economic shift made 2018 a tough year for global shipping and will continue to reverberate through the industry, according to the United Nations Conference on Trade and Development.
FRONT ROW
1/20
PHOTO GALLERY
12345678
TOP NEWS
YESTERDAY| THIS WEEK |THIS MONTH
AUTHORS
12
Video Gallery
12345678
All Rights Reserved © 2006 TURKISH MARITIME | İzinsiz ve kaynak gösterilmeden yayınlanamaz.
Phone : 0090 212 293 75 48 | Fax : 0090 212 293 75 49 |