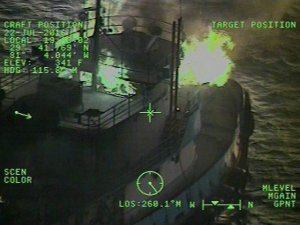 An American tugboat has been badly damaged after suffering a fire Friday while towing a barge approximately 8 miles east of Matanzas off Florida’s Atlantic Coast.

All six crew members aboard donned life jackets and abandoned ship into a life raft. All six were later recovered by a good samaritan vessel and taken to Coast Guard Station Ponce De Leon.

The Coast Guard says it received a distress call at approximately 5:05 p.m. Friday stating that the 100-foot tug Thomas Dann and a barge were on fire. The Coast Guard sent a 45-foot response boat and a Jayhawk helicopter crew from Clearwater to assist. The boat crew was maintaining a security zone around the vessel until a Jacksonville Fire and Rescue boat arrived on scene to fight the fire.

The barge is owned by Express Marine, Inc. out of New Jersey. AIS data shows that the Thomas Dann departed the New York area on July 17.

This news is a total 3996 time has been read
Tags: Six Rescued After Fire Damages American Tug Off Florida, türkishmaritime