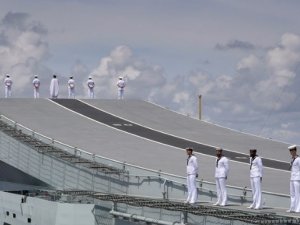 Shortly after the Royal Navy's new carrier HMS Queen Elizabeth arrived at Naval Station Mayport, Florida, six of her crew were arrested for drunk and disorderly conduct - including two who were tasered after allegedly resisting arrest.

The poor behavior allegedly included public urination, fighting, pushing an officer, and refusing to be handcuffed.

According to Sgt. Larry Smith of the Jacksonville Beach Police Department, the sailors started a brawl with each other, not with local residents. “It was a case of good people making bad decisions, they got drunk and they fought among themselves," he told The Telegraph. "But once they pick up their teeth off the ground they hug and then are best friends again."

All have since been released and have returned to their ship.

The Queen Elizabeth arrived in port last Thursday to prepare for her first trials with the new F-35B STOVL fighter. A pilot from the U.S. Marine Corps will join three British test pilots in conducting the first deck landings onboard the ship. When the carrier is fully operational, she will host Royal Navy, Royal Air Force and U.S. Marine Corps F-35B squadrons. "The first F-35B embarked trials in a UK aircraft carrier are not only key to future operational success, but represent an iconic moment for the modern Royal Navy," said Commander Andrew Betton, the head of the carrier strike group.

However, the brawl took the headlines on Sunday, and the Royal Navy ended the weekend emphasizing conduct standards rather than new capabilities. "The Naval Service places great importance on maintaining the highest possible standards of behavior from its personnel at all times," a Royal Navy spokesperson told media.

This news is a total 848 time has been read
Tags: Six Royal Navy Sailors Arrested During High-Profile Port Call