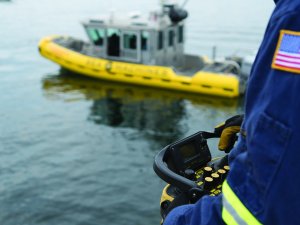 Sea Machines’ remote-helm control marine technology is a core feature for both its flagship SM200 and SM300 products.

Equipped with an intuitive joystick that allows an operator to remote-command manned or unmanned workboats within a 1 to 2KM range from a nearshore location or a collaborative vessel, the use of remote helm control reduces the need to place humans at risk in hazardous situations.

Read on to learn more about primary ways Sea Machines’ remote helm control vessel technology can be used to help mariners to do their jobs more safely, faster and more productively.

This feature is particularly useful during the operations of fleeting, shifting and moving barges via tugboat. Oftentimes, visibility from a wheelhouse can be impaired during these tasks, due to high cargo loads and distance between operator and contact point. But with remote-helm operability, a mariner on board the tugboat can step outside of the wheelhouse or to whichever location gives him the best visibility. From there, he can safely and confidently control the vessel and load, as well as any connected payloads or auxiliary equipment, without relying on a remote spotter. Improving the visibility of on-board crews during a variety of vessel operations is paramount to mariner safety and can help to avoid costly incidents that result from visibility challenges.

Common aboard workboats are various types of payloads, including fire monitors, environmental sampling equipment, skimmers and more. The Sea Machines remote helm enables operators to activate such equipment from an on-shore location or from a secondary vessel, eliminating the need for a human to be in the wheelhouse.

3) Reducing the Exposure of Crews to Hazards

For workboats that operate in hazardous and dangerous environments – such as spill-response vessels or patrol boats – adding Sea Machines remote helm control functionality enables operators to reduce or remove crew from vessels.  Always operated with a human in the loop, Sea Machines remote-commanded vessels can be controlled safely from a mothership or on-shore location, with or without crews on board. This means oil spills can be managed with significantly reduced or eliminated risk to the health and well-being of mariners.

When an emergency call comes in, workboat operators often have to wait for crews to arrive before a response can begin. This delay may lead to deteriorating conditions on the scene, often contributing to greater negative outcomes. With remote-helm controlled vessels at the ready, responders can activate vessels – such as search-and-rescue boats or fireboats – the moment a call comes in, without waiting for full crews to arrive. Once on the scene, remote payload control allows operators to remotely start equipment, like water monitors, from a safe distance. Every second counts in emergency situations on the water, and remote-helm control technologies enable vessel operators to activate faster.

Those in the marine survey or dredging business know how time-consuming and tedious it is to manually execute grid patterns across large bodies of water via traditionally methods. With remote-control technology added to a vessel, mariners aboard a mothership can remotely command minimally manned or unmanned daughtercraft – a capability that generates a force-multiplier effect. This means fleets of smaller workboats can operate during day and nighttime hours, in sea-states that may be precarious for human crews, without stopping for shift-changes. These advantages ensure areas are mapped, dredged, skimmed or searched more efficiently than ever.

6) Built by Mariners, for Mariners – and Available for Installation Now

Built by a team of experienced mariners, Sea Machines systems add new capabilities to workboats and commercial vessels that immediately increase the safety, productivity and predictability of marine operations.

Deploying remote operations is ideal for applications such as mothership/daughter ship arrangements, marine-spill response, firefighting, patrol and security, aquaculture and more. The SM300 or SM200 can be added to all types of workboats as a retrofit or as part of new-build specifications, typically requiring only 10 components to install. Most vessels can be outfitted with a Sea Machines system in just a couple days. Even for small fleets, the system is surprisingly accessible, thanks to an affordable price point.

This news is a total 222 time has been read
Tags: sponsored post