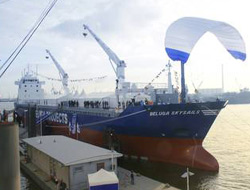 The first commercial cargo vessel in modern times to be fitted with a kite as a towing sail is preparing to leave the German port of Bremerhaven bound for Venezuela.

The first commercial cargo vessel in modern times to be fitted with a kite as a towing sail is preparing to leave the German port of Bremerhaven bound for Venezuela.

The MS Beluga SkySails is due to leave Germany on Tuesday. The sail has already been deployed as the vessel makes ready.

''The maiden voyage marks the beginning of the practical testing during regular shipping operations of the SkySails-System,'' said Stephan Wrage, Managing Director, SkySails GmbH & Co. KG. ''During the next few months we will finally be able to prove that our technology works in practice und significantly reduces fuel consumption and emissions.''

The Beluga SkySails is new-build heavy lift carrier. After sailing to Venzuela it will head north to the US port of Boston.

The ship's owners plan to scale up 160 square metre towing kite to 320 square metres in the course of this year.

In other developments, the German shipping company Wessels Reederei GmbH & Co has been testing a 160 square-meter SkySail aboard its 3,600 deadweight tonne cargo ship the MS Michael A on voyages from northwest Europe to the Mediterranean.

It says the ship has flown the sail on 20 out of 60 sailing days. So far it has been operated by two SkySails engineers, but testing of the auto-pilot system is about to start. Wessels will announce the results of its tests in March.

This news is a total 1861 time has been read