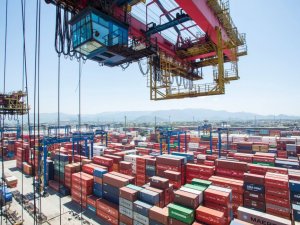 The slowdown in Brazil’s economic growth is evident in the moribund container trade between Europe and the East Coast South America. This trade has proved to be a major disappointment with the latest statistics from Datamar reporting a big drop in demand in both directions for November.

Containerised cargo from Europe to ECSA decreased by 8.4% year-on-year in November, which was only a marginal improvement on the 8.6% and 10.3% drops recorded in September and October respectively. The trade has seen annual declines in every month since March of last year.

Weaker demand in November, coupled with unchanged capacity reduced Drewry’s estimated average utilisation for ships sailing southbound from Europe to ECSA for the month to 62%, down from 68% in October.

Despite ships being less full, southbound spot rates only saw a minor decline in the last two months of 2014. Drewry’s Container Freight Rate Insight reports that all-in spot rates from Rotterdam to Santos fell from USD 2,090/40ft container in October to USD 2,030/40ft and USD 2,010/40ft in November and December respectively.

Similarly, northbound ship utilisation is thought to have decreased in November, dropping to an estimated 85%, down from 97% in November. With a large share of northbound cargo moving under commodity contracts the spot market is not particularly representative, but again spot rates showed minor monthly declines in November and December.

These are hardly the sort of numbers that carriers were hoping for when they invested in new and bigger ships for the route. Discounting Grimaldi’s multipurpose ships, only three carriers (Maersk, MSC and Hamburg Sud) deploy ships on this route, although many others are present via slot charter arrangements. Maersk has indicated that it is considering reducing its capacity on Brazil routes, but so far capacity has remained pretty constant with very few missed voyages.

Drewry believes that carriers will need to revaluate their capacity needs in this trade, which looks set for a prolonged downturn as the major Latin America economies of Brazil and Argentina will take time to recover. Moreover, questions must be raised about whether Brazil’s sub-par infrastructure could handle extra container loads. Future investment could be hampered by the involvement of local construction firms in the Petrobas scandal.